Motorhome travel in the Netherlands: A comfortable experience

Motorhome travel in the Netherlands: A comfortable experience

It’s funny how as soon as you cross the border into some countries you feel comfortable. Holland for me was like that. The architecture is different, the landscape is different and there is water everywhere, but it felt a comfortable fit.

I have to say 40 odd years ago which was the last time I drove round Holland, my memory of the countryside was a bit different. Now we all know Holland is built around the water. But I didn’t remember it being or having so much water in it, on it, under it, and over it. I have to say now it seems to almost have more waterways than actual land or roads. Quite literally every dry bit of land looked like it was reclaimed and elevated – I was amazed. A good example of this is the Afsluitdijk dyke in the north. Originally built in the late 1920s to early 1930s, the idea was to protect and allow the draining of land as water is pumped back into the Wadden Sea.

We crossed over it 40 years ago and while I don’t have the photos with me I am sure it was lower and we could see the Wadden Sea and the fresh water on the either side as we drove across the road on top. 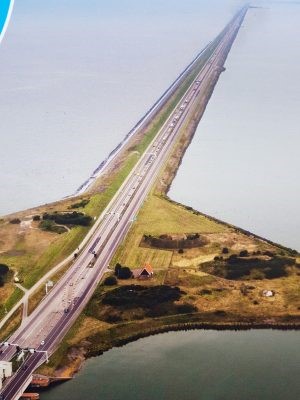 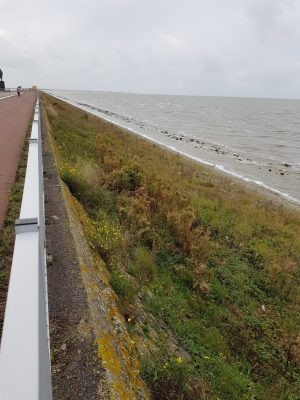 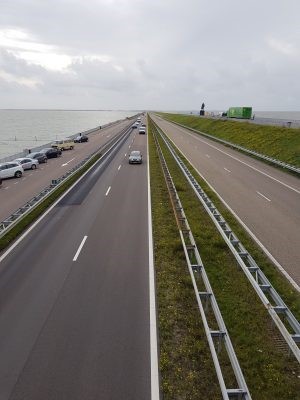 It looks to have been raised and elevated over the intervening years, and now they are doing it again. It was an amazing engineering feat just building the dyke to allow the draining of the land, but they are currently now adding height to the dam, some two metres to compensate for anticipated rising sea levels. With so much of Holland already at or below sea level they will certainly have their work cut out for them in years to come.

Travelling through Holland is best done by a car or mobile home in my opinion. You’ll find yourself in strikingly beautiful towns and villages, and Leeuwarden was just one of those towns. We particularly wanted to go there to see the “Boy and Girl” statue done by the same artist who sculptured Anna in Norway. Needless to say we were not disappointed. 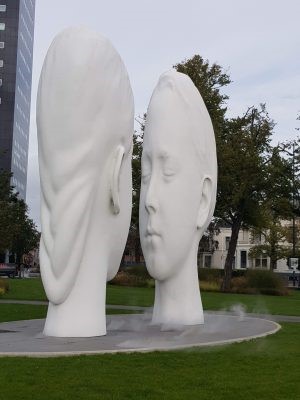 Another surprise village we found on our journey was Giethoorn. It is now a World Heritage-listed site and well worth visiting. Basically the area was a major peat digging area in the Middle Ages. As the peat was dug out the water flowed back in so that the houses were essentially left on islands among the diggings. Now of course they are an attraction. Most are thatched roof delights with amazing gardens filled with hydrangeas, and access is via water taxi or one of the 170 plus bridges that link these homes. 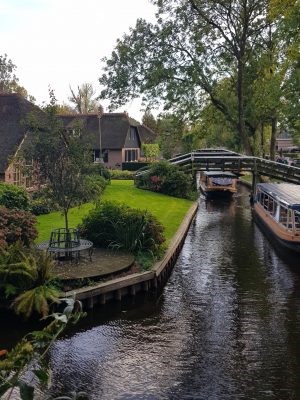 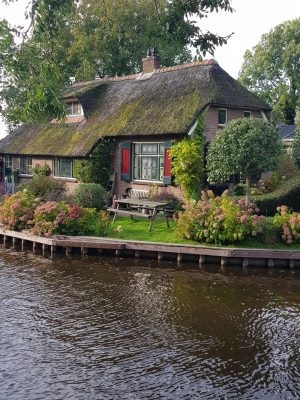 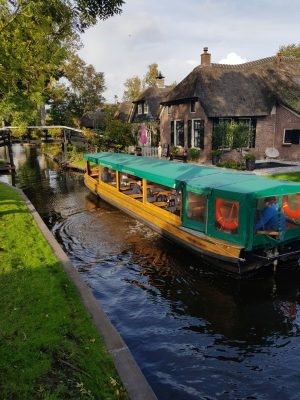 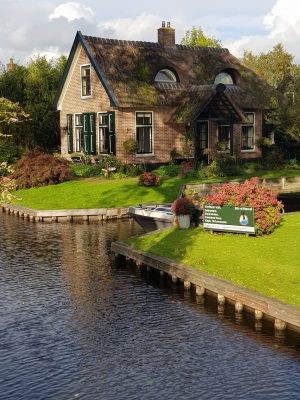 Talk about living in a goldfish bowl, it was the end of the tourist season when we were there, autumn has everything well in its clutches, but there were still people everywhere. Visiting in summer would be chaotic me thinks.

Heading further south we delighted in the town of Gouda, famous for its cheese, but another beautiful town worth visiting, and walking around. 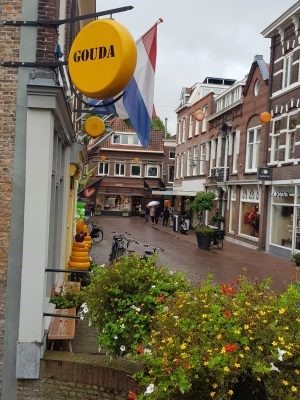 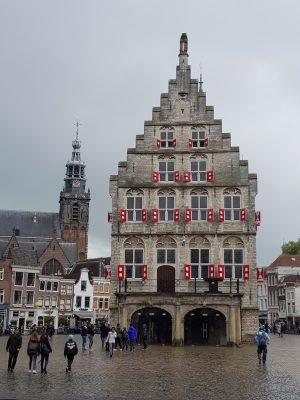 I was interested in visiting Rotterdam fundamentally to see the port area again. The history of Dutch seafaring is legendary, and they had a huge influence discovering New Zealand way back when. But it’s not until you actually drive through this country and experience the waterways, rivers and canals that you can see why the Dutch were such seafarers. As I have said, this is a country with water water everywhere, and the craft that sail its waterways are much varied and numerous. At a guess I would think there are more boats in Holland per head than any other country. They are quite literally berthed everywhere. 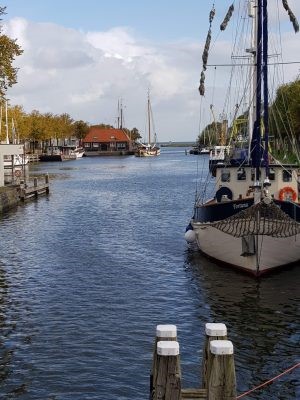 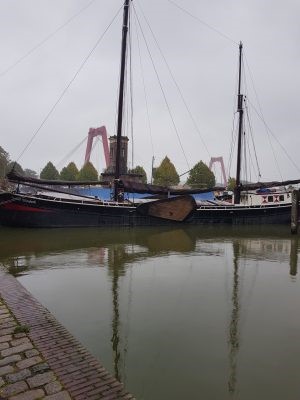 When you visit Rotterdam however they take on a new meaning and size as they work their way up and along the waterway flowing to the North Sea. Part canal, part tributary river for the Rhine, it’s a site worth seeing. The port area is one of the larger ports in the world, and a boat tour sure makes that point.

A quirky must-see in Rotterdam is their cube houses. Built in the late 70s and early 80s they were a modern take supposedly for inner city living. 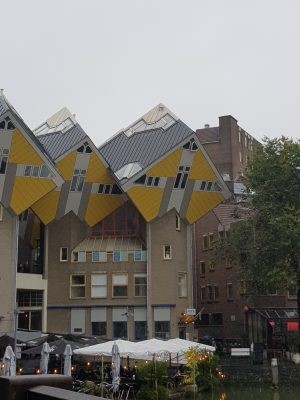 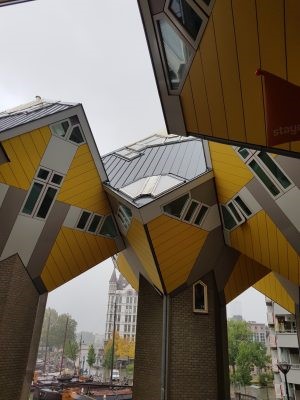 Think the flying saucer houses we had in New Zealand about that time, except put that all into a tilted cube. Very impractical and a lot of unusable space inside, but interesting to visit.

A nice water taxi ride to the outskirts of Rotterdam finds the village of Kinderdijk, known for the 19 odd windmills that line the waterways pumping water to the ocean, in an effort to keep land drained for the inhabitants. Nowadays the pumping is done by large high capacity electric pumps, but in days gone by the windmills did the job of draining the land, or at least trying to. 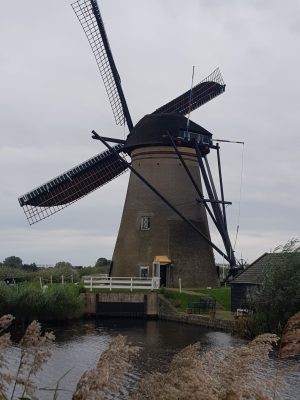 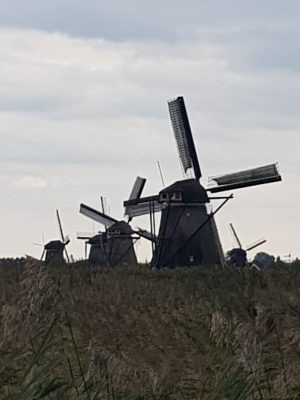 The whole hydraulic engineering feat that created the land we call Holland is simply man’s ingenuity at its best. Understanding that a large part of the country is below sea level is one thing. Actually seeing it, driving round it, and realising what a massive undertaking it all is that holds the sea at bay, is another thing altogether. But they have been doing it for centuries so I think they can still go a few more.

Watch out for bikes

The Dutch are also well-known for being a cycling nation, and like a lot of European cities now the bicycle is almost seen as king on the road. If you do ever get a chance to drive through this delightful country watch out for the cyclists. Now I was a weekend warrior cyclist at home, and we are well-versed in the antics of the average Kiwi car driver and cyclists at home. Boy everyone should get transplanted to Holland. 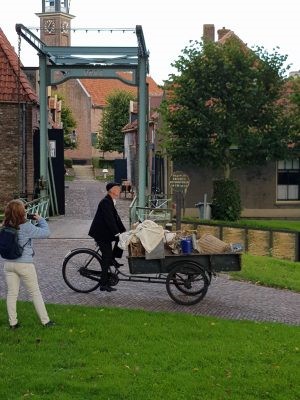 Bikes rule the roads, and they know it. The bike lanes are everywhere including around the myriad of roundabouts that dominate the road ways. It is truly a driving nightmare going into roundabouts over here, whether you are in a roundabout and exiting it, or just still entering into a roundabout, you are watching the traffic in front of you and around you. Next minute, a bike or six are coming up past you, across you, or around you with full right of way over regular traffic. It’s nerve racking checking every direction around you half a dozen times each time you go through these things. But we survived and thank goodness we didn’t run a cyclist over. Not sure how we avoided that but we did.

A quick trip to Luxembourg

We have booked our return trip to the UK on the Chunnel. Karen hasn’t experienced that pleasure in a motor vehicle so we are booked for Friday. However with a few days left up our sleeve we decided on a mad dash to Luxembourg to visit this small country and the city of the same name.

What a delight, one day you are in the flat table top topography of Holland, next you are in some of the most picturesque rolling fertile land you’ll see on your travels. This small country is like a mini Switzerland, with a bit of French and German architecture thrown in. Another wealthy country due to its tax haven laws, but boy oh boy is it ever a feast for the eyes to travel around. With us here in the autumn the leaves are turning now so everything is a riot of autumnal colours. But great roads, clean well-presented villages, and an ever-changing landscape make this a great place to visit. 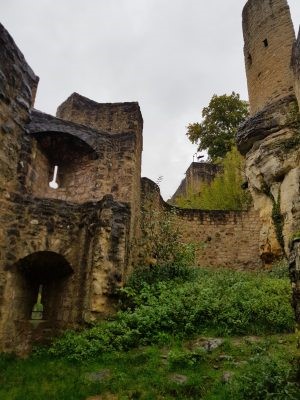 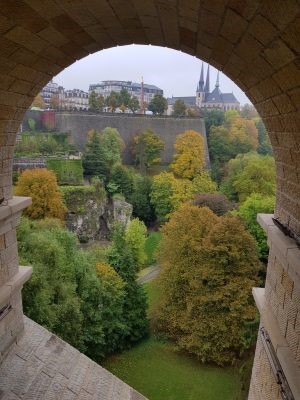 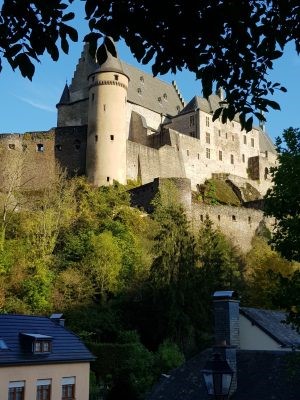 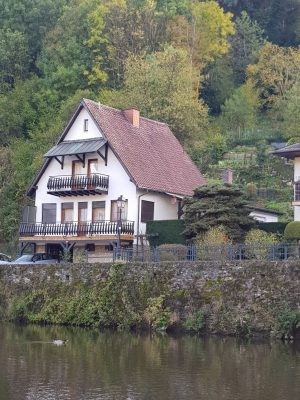 Luxembourg City – I’m not sure how best to describe her. There is no doubt it is a beautiful historic city, however perhaps because of when we were there, we didn’t see it in the best light. For starters, the weather was horrible so that didn’t help, but it’s obviously a city going through growth pains, because I have never seen so much infrastructure work going on in one place since we left Christchurch. Roads pulled up everywhere, apartment blocks being built everywhere, they weren’t pretty and the traffic was a nightmare as a result. All this in a city not much bigger than Christchurch and it hasn’t had any earthquakes. I expected something better and different, but we could see the diamond among all the rough – it was just buried among the roadworks and construction when we were there.

Now as I write this last paragraph or two we are in Calais, and early tomorrow we get on the Chunnel and cross back to Blighty.

Have Jim and Karen inspired you to embark on your own motorhome adventure? Start planning your next motorhome holiday with the team at World Travellers Riccarton.