In September I visited northern France, the Dordogne and southern France. Some places I visited with friends and some I travelled to alone.

We started with a transfer from Charles de Gaulle Airport to Gare St Lazare for a two-hour train ride to Bayeux in Normandy. We loved Bayeux, located on a small river with picturesque limestone buildings. It was the first town liberated by the Allies WWII and their appreciation is evident.

Another popular day trip from Bayeux is to the WWII landing beaches, which is a worthwhile trip to make for those interested in military history, or who perhaps had relatives that fought in WWII.

There’s an interesting peaceful garden to walk through in Bayeaux, and beside the Cathedral is a large beautiful oak tree that is lit up by a light show three nights a week.

The highlight of Bayeux is undoubtedly the Bayeux tapestry which is over 1,000 years old and 70 metres long. The story of the 1066 Battle of Hastings is told in colour on linen background as people were mainly illiterate back then. Whoever actually made it remains a mystery, but evidence points to England and when finished it went to Bayeux where William the Conqueror’s brother was bishop and hung it in the Cathedral. We loved it, and soaked up all the information about it.

Honfleur and the Seine 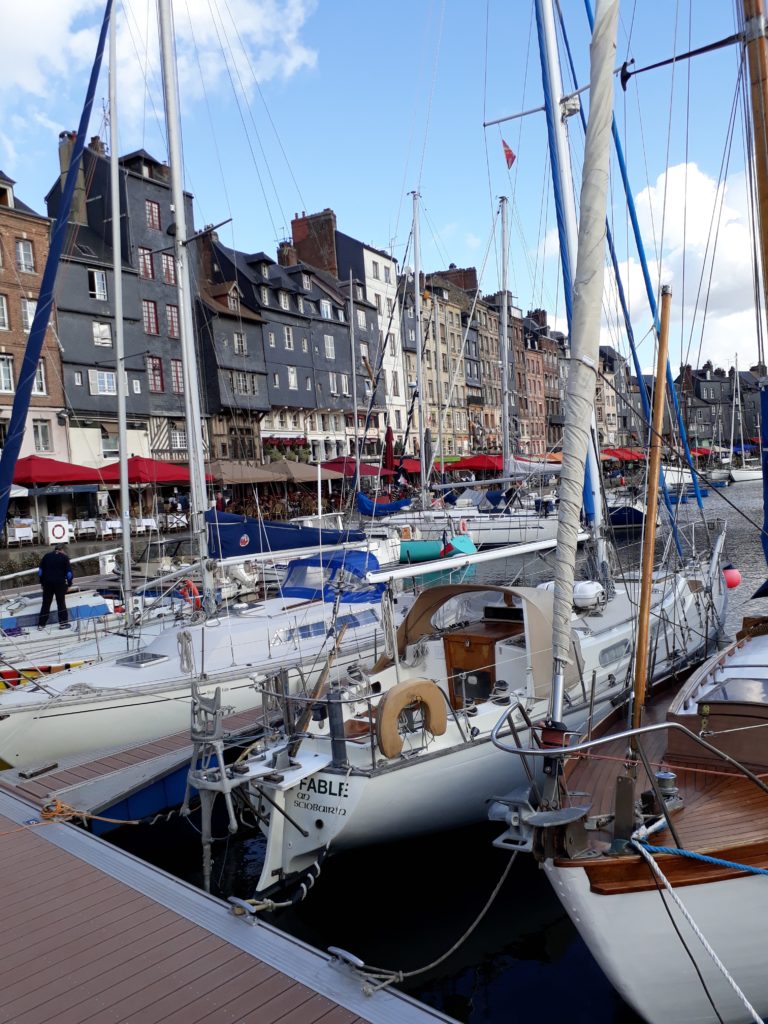 Honfleur is where the Seine meets the sea. This town is centred around the basin and is full of pleasure and fishing boats. The buildings that surround the basin are incredibly old. Honfleur is home to the largest wooden church in France called St Catherine’s with beautiful stain glass windows and separate wooden bell tower.

We did a boat trip out on the Seine. Firstly, we had to exit the basin via lock, and then we headed up to see the Bridge of Normandy which residents are very proud of. The bridge carries 19,000 cars a day except in summer at weekends when numbers reach 30,000. We returned with good views of the port Le Havre which is directly opposite Honfleur and can handle the largest container ships. 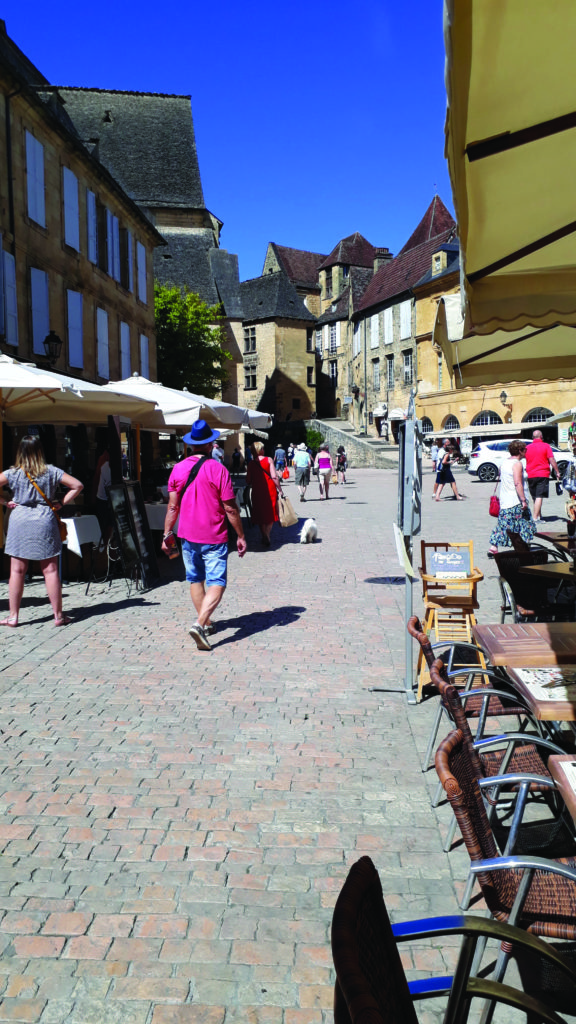 Sarlat is a beautiful medieval town with alleyways, squares and narrow streets. Most visitors stay a week and have a car like you would in Tuscany or Provence, as there’s so much to see – castles everywhere, historic sites and beautiful villages. The town is also known for its gastronomy like their famous foie gras, truffles, walnuts, wines and liqueurs. They even make walnut wine.

Twenty years ago, I was told to visit Cassis before the rest of the world discovered it, and since then they have! However, it wasn’t too hectic. It still has a seaside holiday village feel, and I loved it. There are lots of outdoor things to do here, such as sea kayaking and walking trails. The boats in boat harbour are regular pleasure craft not the obscene craft like in Monaco. Cafes and restaurants surround the harbour, and it’s very pleasant for having a coffee or lunch at.

Cassis is also famous for its calanques, which are channels of sheltered water – often turquoise in colour – and surrounded by high limestone cliffs. The walking trails are around these cliffs and there is even one to Marseille, but that one’s not for the faint hearted!

I did a boat trip out to see three calanques but there are many more. Astoundingly, in 1985 a diver discovered a chamber accessed through very long tunnel with paintings of animals and sea creatures from thousands of years ago. 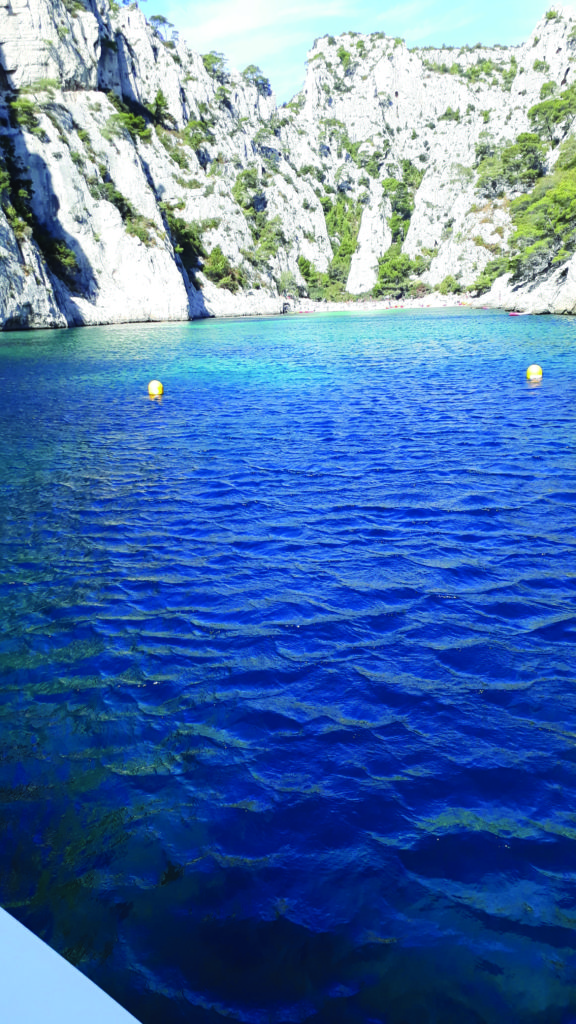 The Romans discovered and named Cassis in 150 AD – just in case you need to know this for quiz night! There is a hotel here overlooking the bay that Winston Churchill liked to stay in and paint.

The best beach happens to be directly over the road from my hotel so I had to have a swim (though perhaps let’s call it a dip as it was so cold). But it was very pleasant on the beach – a perfect temperature for September. My hotel was called Jardin d’Emile and was very shabby chic.

My last stop was at a B&B in the village of Olonzac, capital of Minervois, Languedoc- Roussillon, equidistant from Carcassonne and Narbonne. What a wonderful five days we had feeling like visitors rather than tourists staying with our hosts Mark and Kay (both Kiwi) in their B&B Sainte Helene.

Each day they took us out to see the sights which have included the medieval walled city of Carcassone, two of France’s beautiful villages Minerve and Lagrasse, Narbonne with its Roman underground granary from 100 BC and its imposing Cathedral, a beautiful Abbey called Fontfroide, as well as a boat ride on the midi canal.

Each day we had lunch out and each one was different and astounding. First was a picnic lunch (four courses) sitting at a table under a tree in the countryside beside a little stone church. 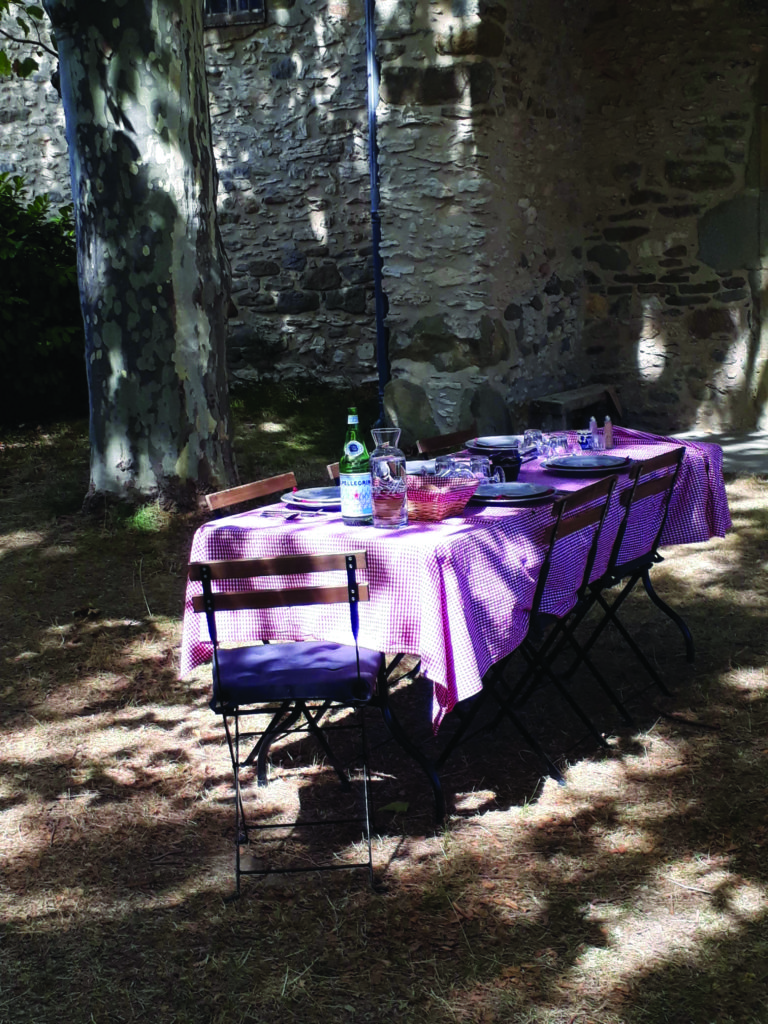 The next day we dined at a Michelin restaurant in village of Minerve. Minerve is one of France’s beautiful villages and is built high on a gorge. This area is famous for the 11th century fights between the Catholics and the Cathars – those who worshipped two gods and were seen as a threat to Rome. At the restaurant we enjoyed roast duck stuffed with figs as well as French style pavlova.

On the last day we ate in a private home, which of course was fascinating as the buildings were so old, plus the chef cooked some incredible food. However the piece de resistance was the farewell dinner on the final night in a private dining room in a building that was ancient. The food was sublime.

So far, I have not mentioned the wines of the area. We certainly tried many that were extremely good. I enjoyed the local sparkling wine and also the rose. Their chardonnay is made in such a different manner to back home that even I drank and enjoyed. The reds had amazing aroma and were so smooth. The terroir is so important. There’s no proper translation of this word into English but it means the soil that the grapes are grown in, whether on a slope or flat. It was harvest time while we were there so we saw trailer loads of gorgeous looking grapes.

I finished off my French trip with one night in Paris and went to a light show of Van Gogh paintings which I can highly recommend.

Thinking about planning your own trip to France? Get in touch with us – we’re real travellers just like you, and we use our own personal experience to help you experience the world differently.

There’s more to Belgium than just biscuits By Jim Davis   After canal boating and touring in a motorhome around the UK, Jim and Karen have arrived on...