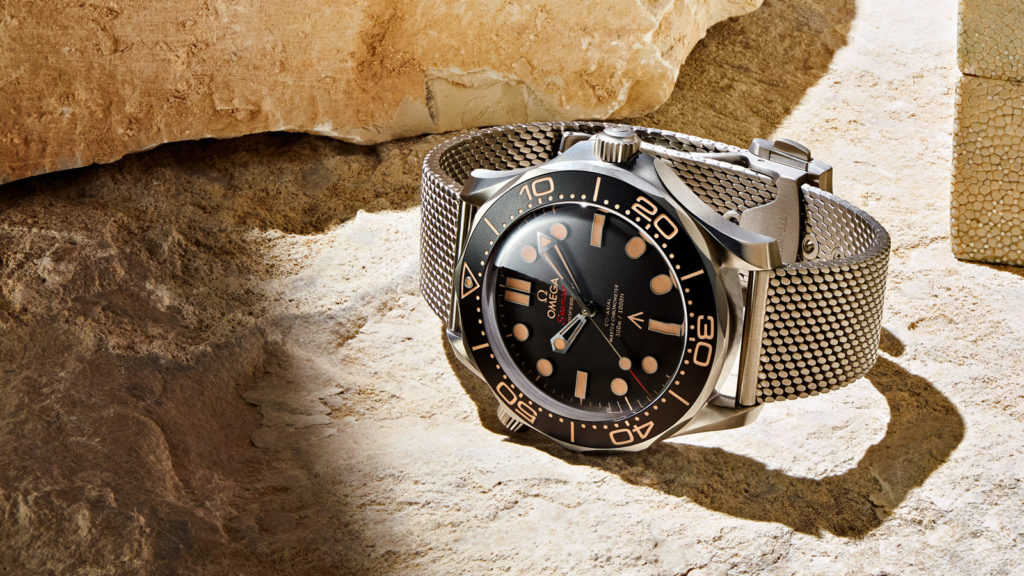 Omega as a brand does not carry the same recognition and prestige perhaps as Rolex but they are worth considering due to their history, quality and variety of offering.

The Omega Watch Co was founded in 1903, a division of the La Generale Watch Co (founded in 1848). The company developed the Omega brand to market their cutting edge quality production which allowed parts to be interchanged between movements. 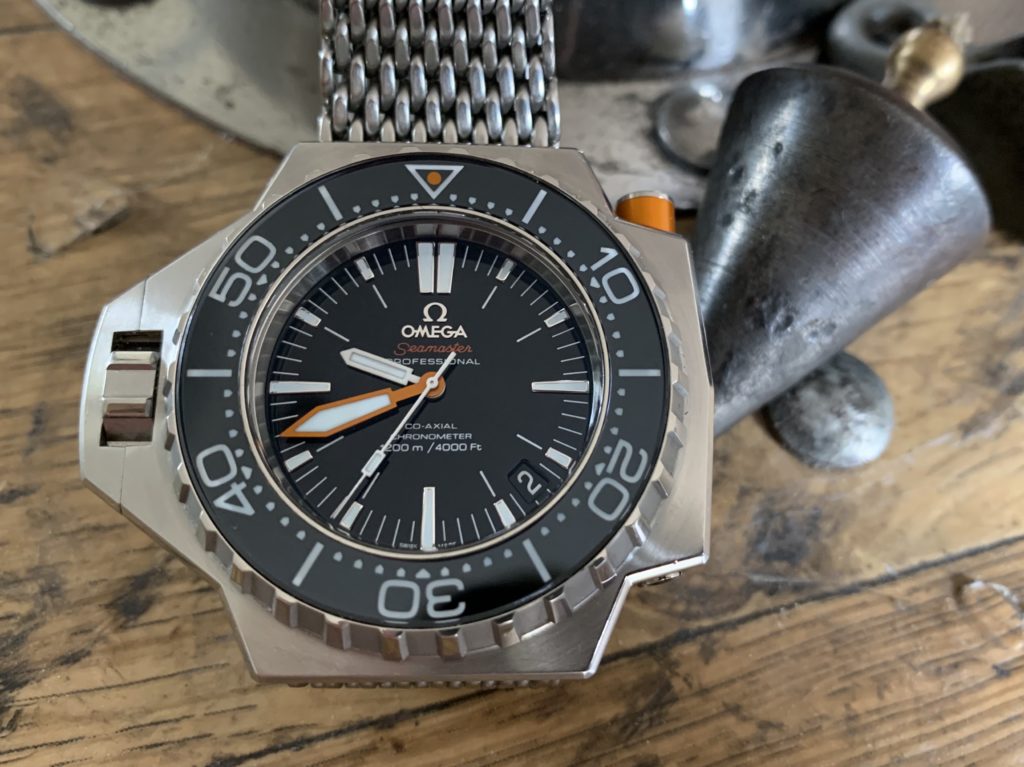 Today Omega is part of the Swatch Group which also includes Blancpain and Breguet.

My first luxury watch was an Omega Ploprof. Probably the most distinctive, chunky and tool like watch in the luxury watch sphere. Ploprof is a French contraction of Plongeur Professionnel, “Professional Diver”. Why would I choose such a large, angled and obscure watch as my first luxury watch? In truth I had no idea that the purchasing of this watch would start my luxury watch journey.  I grew up watching Jaques Cousteau, pioneer of the aqua-lung/scuba equipment used today. An underwater explorer and environmentalist, his watch of choice was the first edition of the Ploprof, initially released in my birth year of 1970.  Fascinated by his underwater filming I dreamt of exploring the ocean depths myself, a dream still not realised today but I can still feel a connection at least when I wear the watch. Whilst my Ploprof is solid stainless steel, weighing in at an impressive 278gms including the distinctive Milanese or shark mesh bracelet, today’s version is Titanium removing much of the weight and perhaps some of the character of the true tool watch. The watch’s distinctive button on the right of the case must be depressed to allow the bezel to rotate, thus ensuring no accidental miscalculating dive times. With a waterproof rating of 1200m, a 5mm thick crystal and a Helium escape valve for saturation diving, this is still a very capable diving watch for even the most demanding underwater missions. It is considered poor taste by some to wear anything but a three handed dress watch with a tuxedo (don’t tell 007) but personally I enjoy breaking this rule on occasion and often wear my Ploprof and other diving watches with formal and business attire.

Omega understands the power of leveraging events and people. One of the biggest events in world history and humankind’s achievement was the first human walking on the Moon. NASA tested many watches for the Apollo and Gemini missions with what is now called the Omega Moon watch being the only watch to pass all the NASA tests.  Worn by astronaut Ed White in 1965 during the very first space walk, and more famously the first watch worn on the Moon in 1969. While the movement has been upgraded over the years todays Moon watch is still flight certified by NASA. Typically with a Hesalite acrylic crystal (so as to not shatter like glass and potentially cause issues in a zero g environment) and solid case back the modern Moon watch is also available with a sapphire crystal and display case back for those who wish to appreciate the beauty of the manual wind movement. There are many variations of this watch including a smaller automatic, many limited edition models as well as a wide variety of complications and materials. One of the more unique in my collection is the Apollo 8 “Dark Side of the Moon” edition. This to mark the 1968 mission that was the first crewed spacecraft to orbit around the far side of the Moon and thus were the first humans to see an “Earth rise”. The watch is constructed of black ceramic, including the crown, button pushers and lumed bezel. The skeletonised dial features a laser engraved image of the Moon’s surface and this laser ablation is also repeated on the rear bridges of the movement to show the features of the dark side of the Moon.  The resulting watch with its black leather strap and yellow highlights is one of the most unique watches in the Speedmaster Professional collection and has, what I believe to be, one of the best looking movements on show. 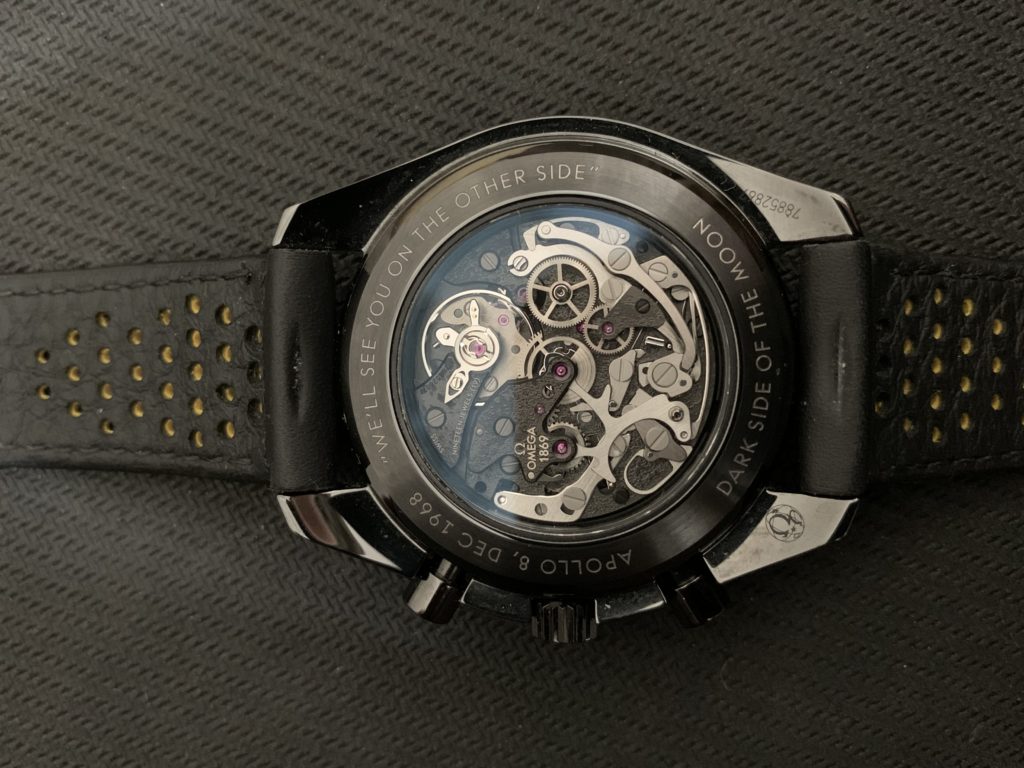 When it comes to personal alignment Omega is most well known as the current watch of choice for James Bond.  This relationship started in 1995 when Omega took over from Rolex on 007’s wrist. The relationship with the Bond franchise has been strong and lucrative for Omega including several themed watches featuring various nods to the Bond brand. This year will also see the latest Bond watch from Omega. The special – but not limited edition – watch had design input from current Bond actor, Daniel Craig. Rather than being a Bond branded watch (some in the past have featured 007 logos on the dial), it actually reflects the watch that a man of James Bond’s military background would wear. Importantly it also features in the latest movie “No Time to Die”. Titanium cased with matching metal bracelet this watch has a vintage charm, military inspired dial and case markings and domed sapphire crystal.  At the time of writing this article I am awaiting the first one to arrive in Partridge Jewellers’ Christchurch store at which time I will decide if it will be added to my collection.