New Trends in Christchurch Real Estate: Back to the City Center!

When the price of downtown Auckland began to become unpredictable, investors turned their attention to the South Island. After eight years of earthquake reconstruction in Christchurch, has its city center finally returned to its former vitality?

The development of high-end apartments in city centre

The high housing prices in the North Island have led some investors to switch to apartments in the heart of Christchurch. The purchase of apartments and townhouses by non-Christchurch residents has increased significantly over the past few months, statistics show.

“When average prices are $500,000 in Christchurch and $1 million in Auckland, you can certainly see the appeal,” said Kelvin Davidson, senior economist for property analysis firm CoreLogic. 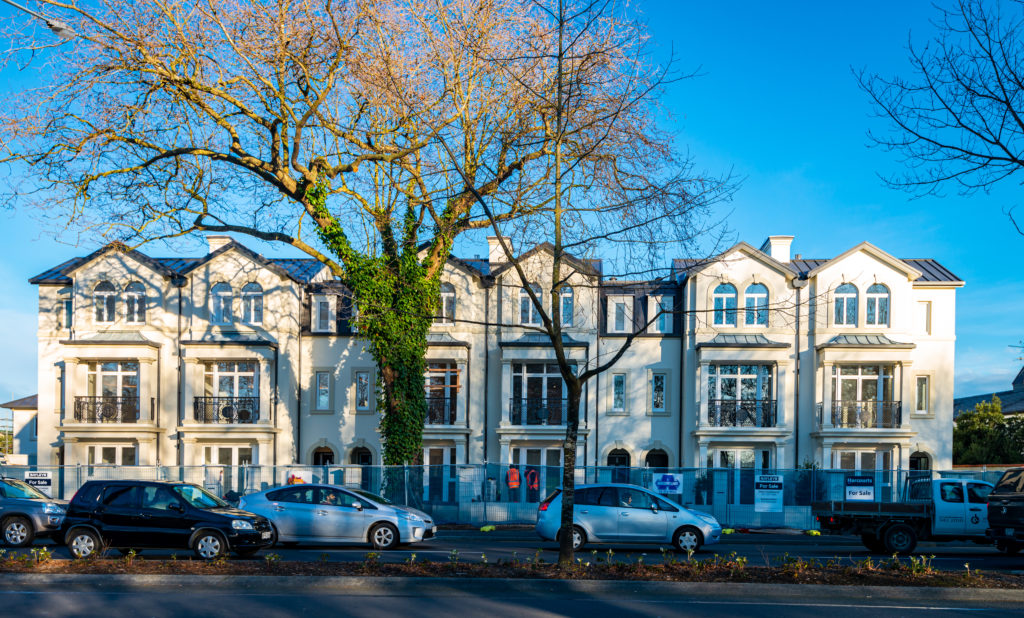 Davidson said the trend was triggered by the government’s dropping of the capital gains tax plan earlier this year.

“What you see in Christchurch is that the tax uncertainty for investors has disappeared,” he said. 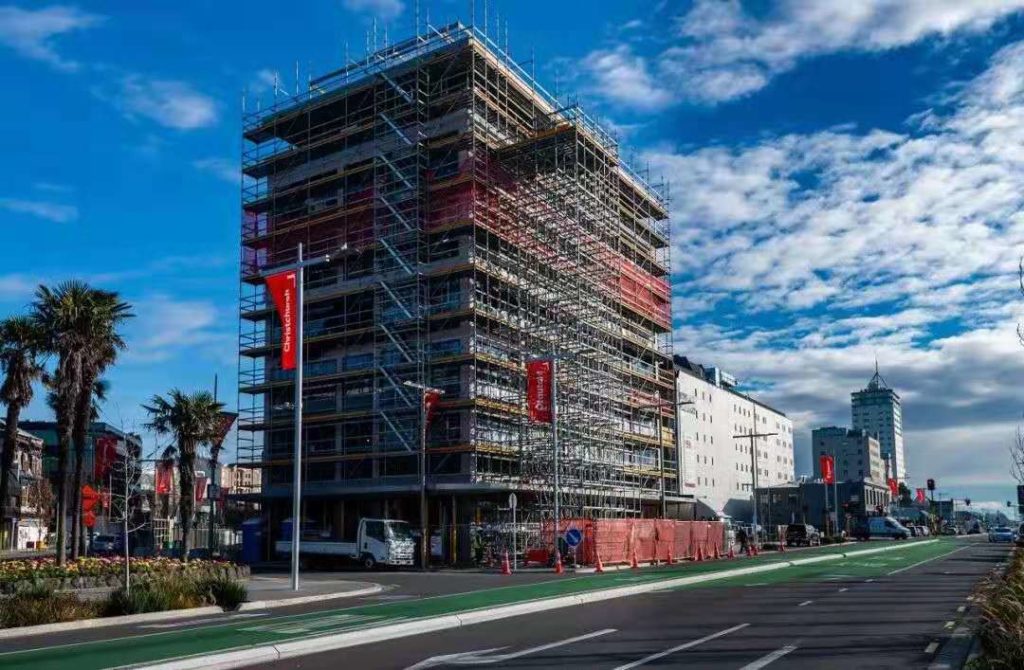 In the years following the earthquake, apartment sales in some parts of Christchurch have been stagnant, and some development projects have been cancelled or redesigned, or repeatedly postponed by post-earthquake reconstruction plans.

At the same time, however, some high-end apartment projects in the city centre have been injected new funds. For example, local investors have already committed more than $14 million into the redesigned Cranmer Gardens luxury apartment complex.

Site preparation has started on the site bordered by Kilmore, Montreal and Peterborough Streets, which was previously occupied by the old Christchurch Normal School (and later became the Cranmer Courts apartments). 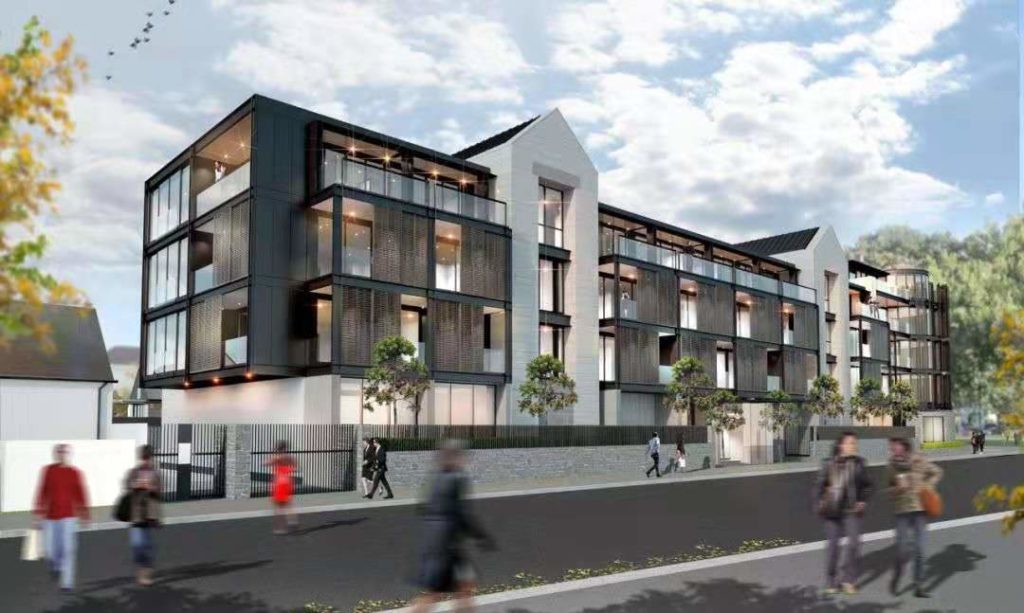 “The Cranmer Gardens luxury apartments are very attractive to people who want to retire to the city and for professionals wanting a lock and leave property,” said Aaron Boddington, Chief Executive of Huadu International (NZ).

“They are perfectly positioned for residents to walk to the Town Hall, the convention centre, the planned new stadium and everything else that is happening in the revitalised central city,” Boddington said. 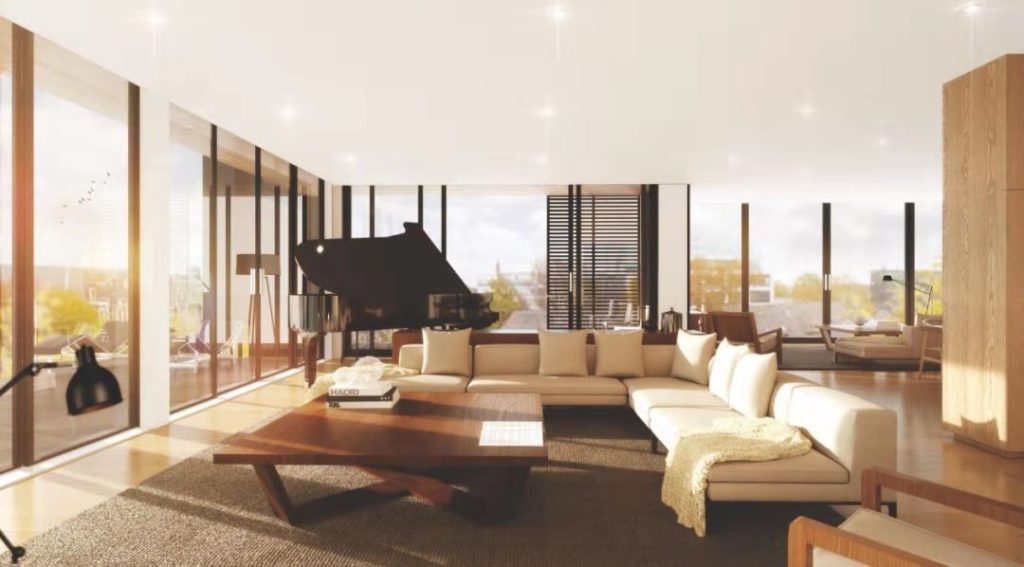 “There is a gap in the market for generously sized, superb quality, high-end apartments in Christchurch, and Cranmer Gardens will meet this demand,” he said.

“So far all of our buyers are from the South Island, but we are also seeing strong interest from throughout New Zealand and overseas,” he said, adding the apartments range in price from $495,000 to around $4.2 million for the largest penthouse.

It is expected that they will be completed and ready to move into by late 2020 or early 2021. 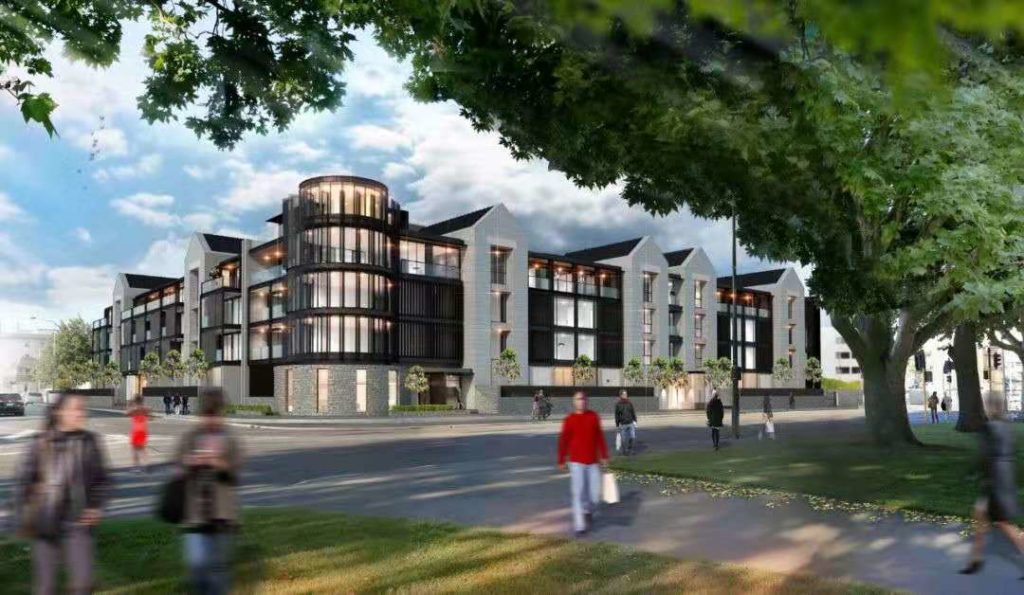 Hagley Mews, adjacent to downtown Hagley Park, is another apartment/townhouse project attracting attention. More than half of its units have been sold or under offer so far.

At 10 Ayr St and Deans Ave overlooking Hagley Park, the site was the former upmarket Heatherlea apartments. It has been rebuilt by Profico Group whose director is Russian-born Grigori Koulanov.

“I do feel that houses need to be warmer here,” Koulanov said, adding his experience in Russia and Europe gave him confidence in building a warmer home. All 26 Hagley Mews townhouses are designed with European tilt and turn triple glazing windows which are warm and quiet. 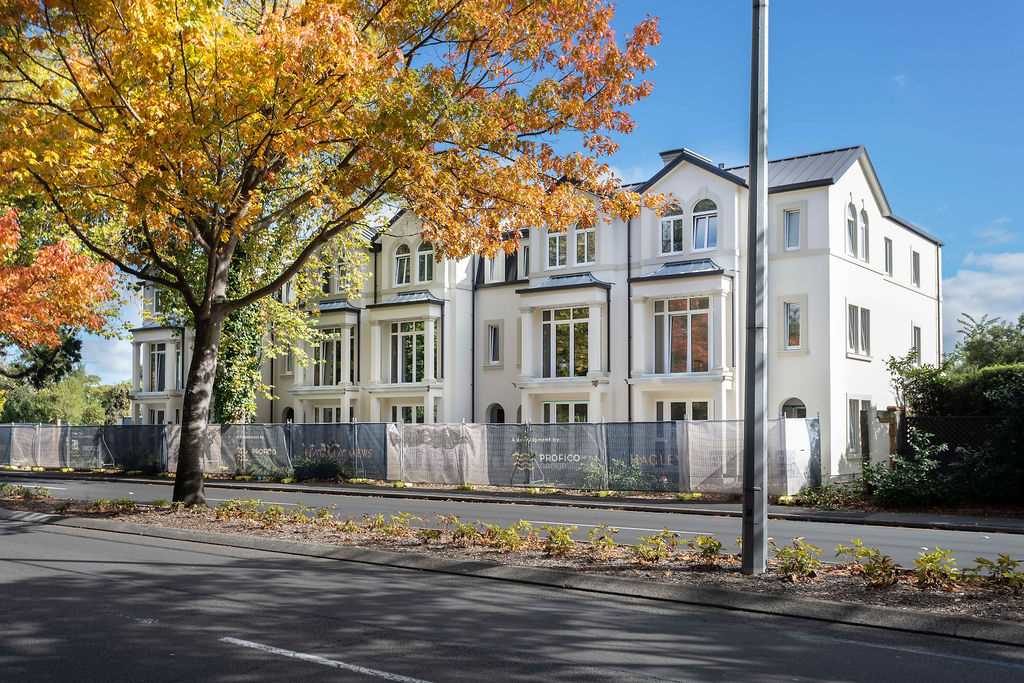 Koulanov is proud of every detail in Hagley Mews, such as European doors with Italian door handles and invisible hinges, Italian tiles with underfloor heating, toilets and basins, among others.

It also includes a swimming pool, a gym, a separate hot spa, and sauna. These facilities are located inside the small community. 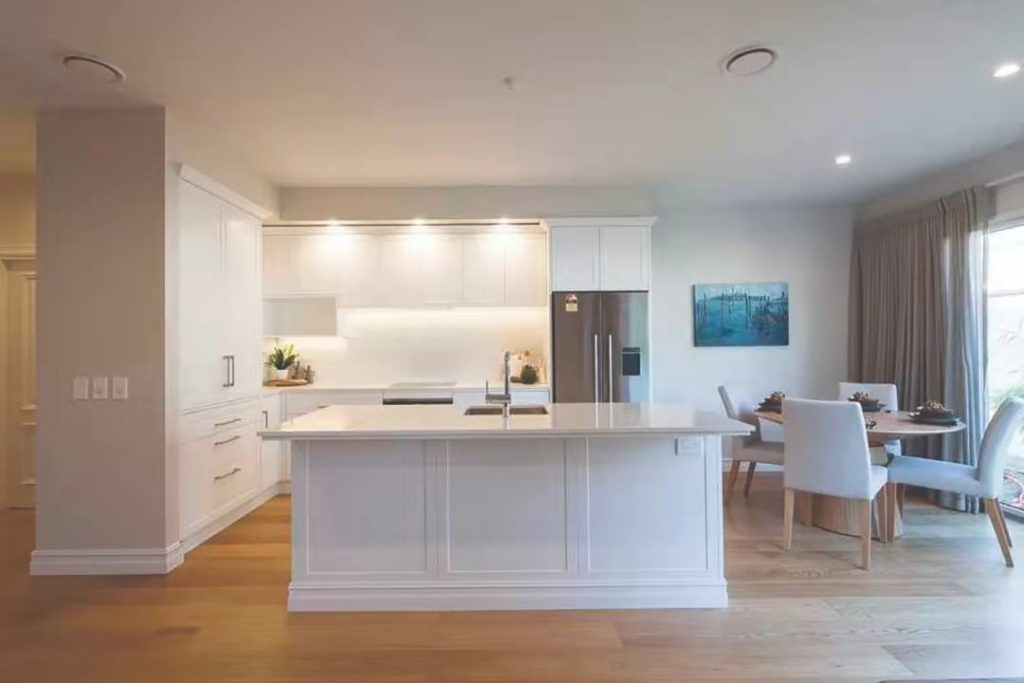 Koulanov adopted a different English Regency-style architectural design for the townhouses, which was the choice he made after conducting his own market research by asking Riccarton residents what type of architecture they preferred.

A sales manager at an investment apartment in the city center said that an increasing number of investors from Auckland flied to Christchurch to see housing projects. 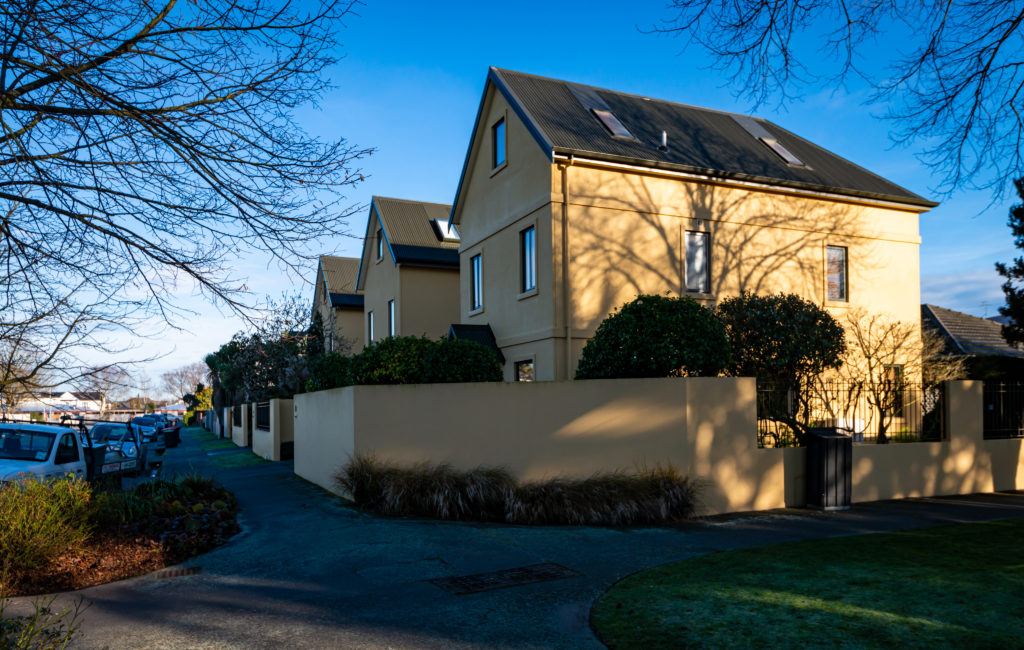 The current price of apartments and townhouses for sale in Christchurch city centre ranges from $300,000 to more than $2 million.

Christchurch City Council aims to increase the population living in the city centre to 20,000 by 2028, about three times the current size. 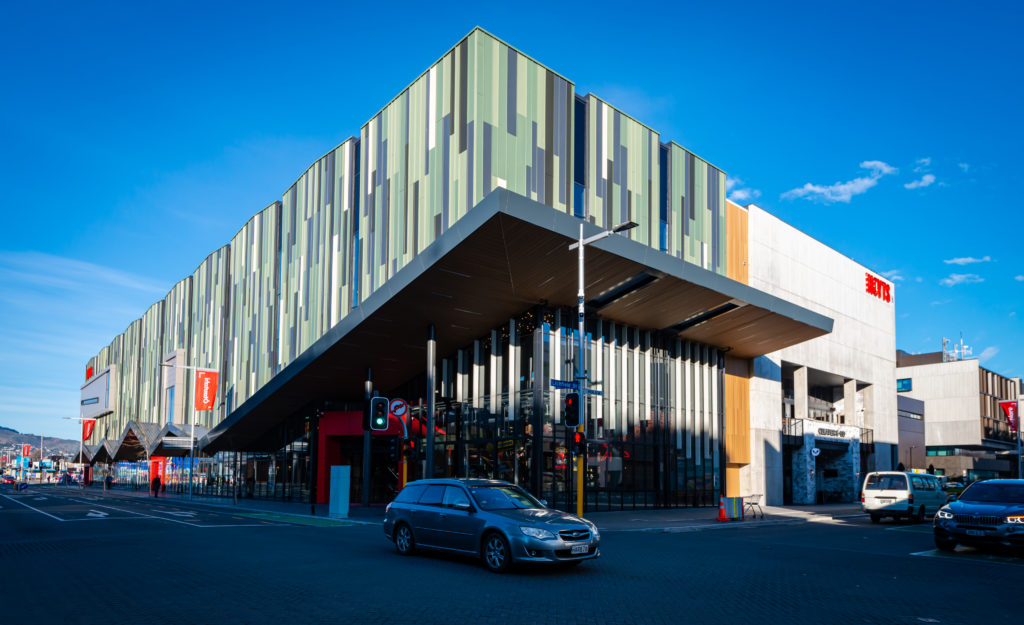 An investor from the North Island told Palmary that Christchurch’s real estate is worthy of consideration, with relatively good rental returns.

However, the investor declined to be named said that he does not want the downtown property to be flooded with Airbnb, “with noisy people coming and going.” 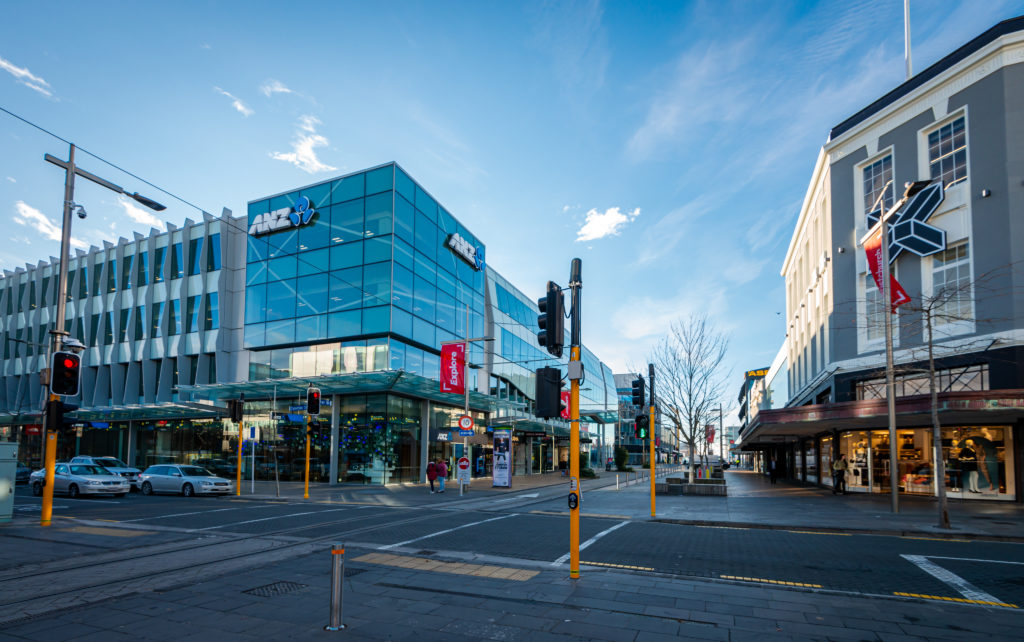 The Atlas Quarter of Fletcher Living said they have sold 70 to 80 percent, while the more expensive Latimer Terraces project has sold only about 20 percent.

The government also strives for preferential policies for these developers, such as proposing to reduce urban taxes and fees. In order to lure people back to the city centre, the government also proposes to remove school district limitations for residents living within the four major city centre avenues. 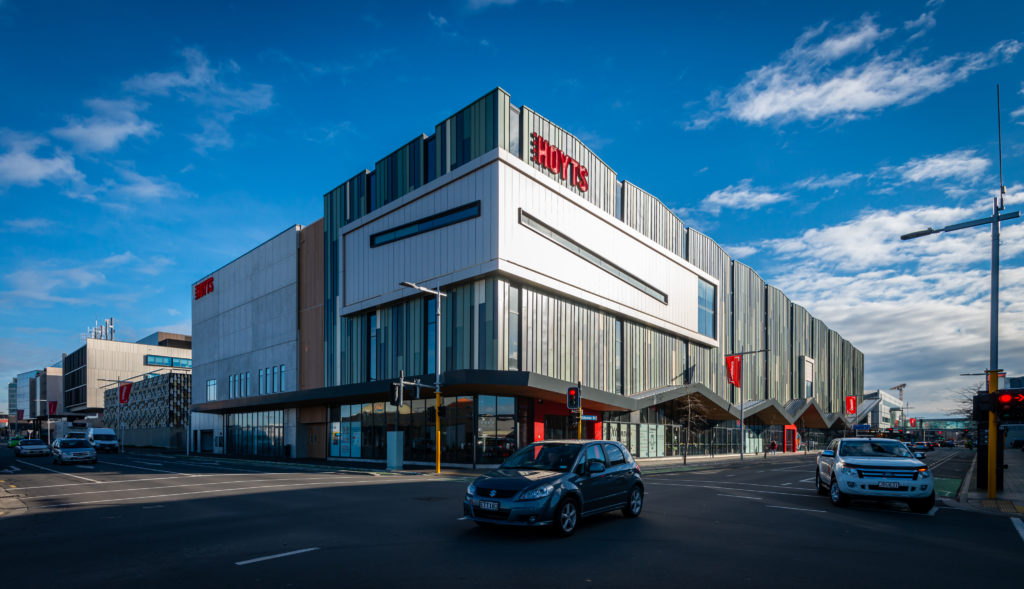 “The government’s general plan is definitely to implement policies that are more attractive and beneficial to home buyers so as to attract local residents to return to the city, rather than just attracting investors to buy apartments for Airbnb rental,” he said.

The dropping of capital gains tax and low mortgage rates have attracted more investors to buy property, he added.

Some developers have found that unlike most of the first or second home buyers they have seen before, half of the current buyers are investors, and nearly half of them are non-Christchurch residents, including overseas buyers.

They believe that Christchurch’s housing prices are relatively strong, with less price fluctuations. Investors have been optimistic about Christchurch’s real estate about four years ago when a few projects were launched. 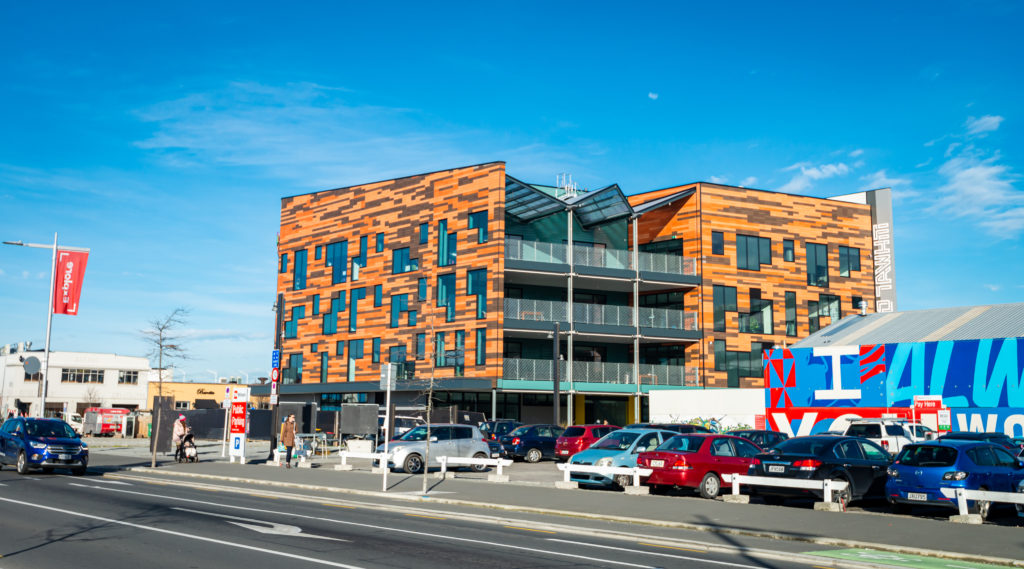 Wang said apartment developers need to make enough pre-sales to get financing, and a large number of non-Christchurch and overseas investors become major market players, and they are the key to developers continuing to build houses in Christchurch city centre.

There are also first-time homebuyers who use KiwiSaver in home purchase, he said.

The city’s economic development and promotional agency ChristchurchNZ launched in June a campaign “Baby Come Back,” which was aimed at enlivening the central city and increasing patronage for shops, bars, eateries and hotels.

A 70s pop hit and comedians Shay Hooray and David Correos play childlike twins Chadlee and Chatfield (named to represent ChCh) in the campaign’s videos and posters, to give central Christchurch a winter boost.

Retro-styled in matching outfits, the pair feature in long and short videos. They punt on the Avon River, shop, eat, and enjoy the Margaret Mahy playground and the central library.

American band Player’s 1970s single “Baby Come Back” was adapted by local musician Jed Parsons and used as the theme song in the videos.

“The time has come to explore your city centre. Come back into the four avenues to check out what’s offer in the CBD. It’s here waiting for you, waiting for your sweet, sweet love. Join our unlikely heroes Chadlee and Chatfield on their Christchurch adventures, taking in your city’s finest features. Come back into the city centre, warm up these cold days, and let’s heat up winter! Yeah baby, yeah,” the promotion of the campaign reads.

The campaign is aimed at young professionals, families, and retirees, with a hope to attract more visitors to explore the city centre, which will help the commercial revival of the city centre. 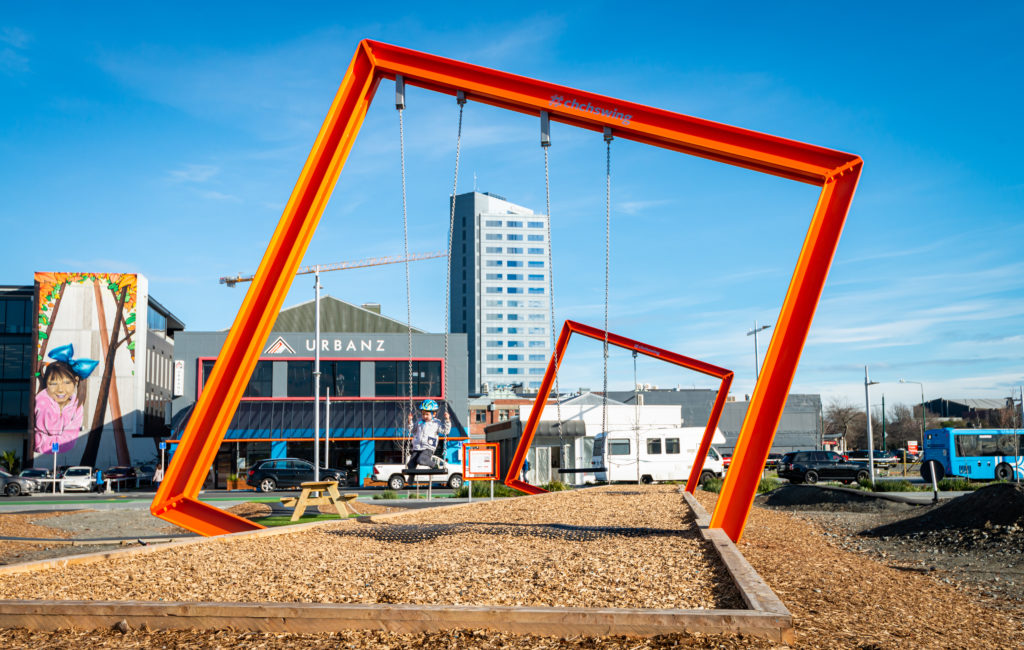 In a survey earlier this year, three-quarters of respondents told ChristchurchNZ they were positive about their central city, up from a third last year. However, many said they were reluctant to live in the city center because of begging and anti-social behaviour.

According to the survey, nearly half of the people who come to the city center were going to restaurants and bars, 35 percent were shopping, and 33 percent were visiting attractions.

Wang said the campaign is “sincere” in encouraging Christchurch residents to return to the city center, which is beneficial to the real estate recovery. 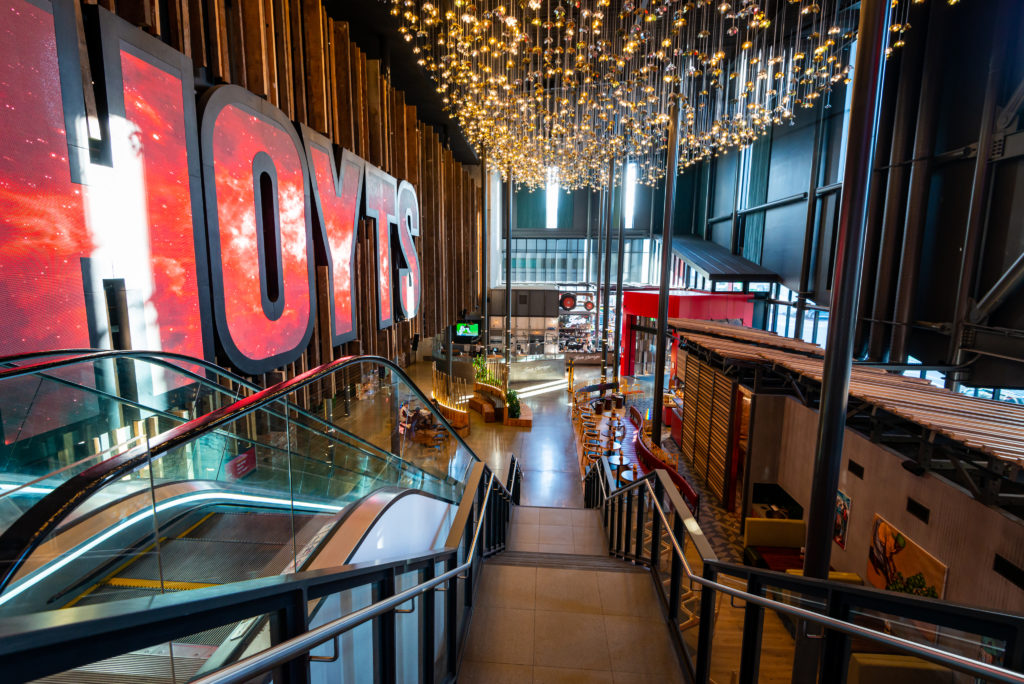 Whether they are willing to return to the hustle and bustle of downtown from their original idyllic life with front and back yards should also be considered, he added.

Wang said that looking at the major cities of New Zealand and Australia – Sydney, Melbourne, Auckland and Christchurch, the CBD culture in Christchurch is slightly weak. Coupled with Christchurch’s ample land supply, people have a wide choice in the homebuying market. 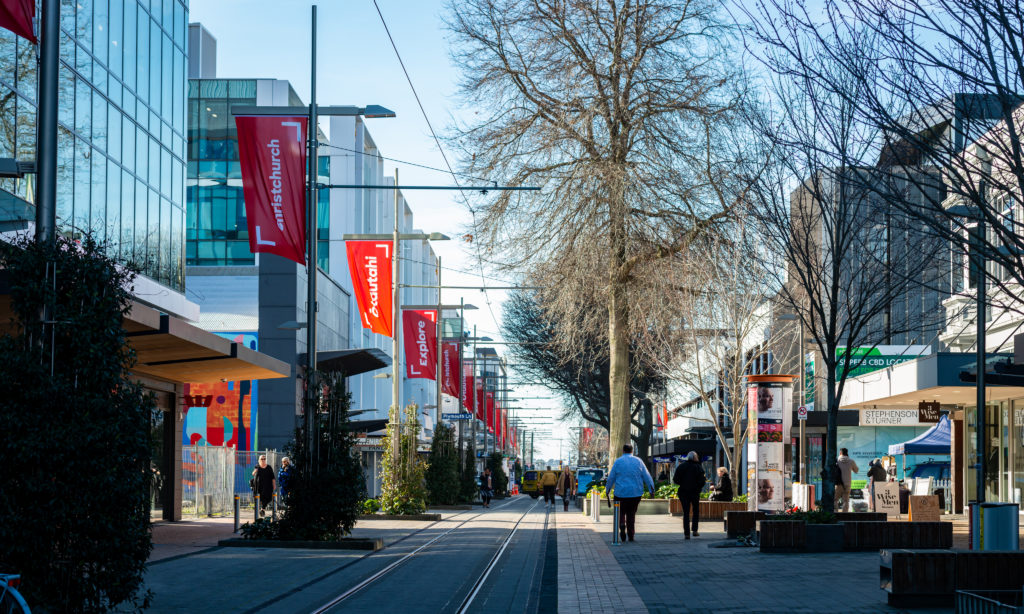 In addition, the cost of land acquisition by developers in the urban area is relatively high, which will definitely affect housing affordability in the city centre, he said.

“Of course, the city center is the appearance of a city, and its housing market will certainly get better. From the perspective of long-term investment, the current city center property may also be a bargain-hunting opportunity. In the future, it will probably become a hot investment choice when the vitality of the past is restored.”

“It is undeniable that the development of the real estate reflects the change of a city,” he said.

Lianne Dalziel: "I have the best job in the world"