CATHEDRAL REINSTATEMENT ‘GOING LIKE THE CLAPPERS’
By Olivia Spencer-Bower 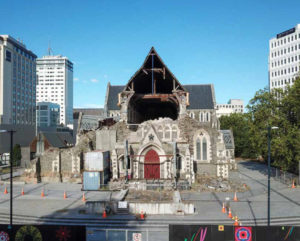 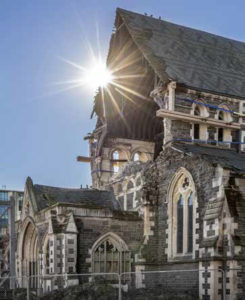 Aerial photo taken on Feb. 21, 2019 shows the remains of a cathedral damaged by earth-quake in Christchurch, New Zealand. A ceremony was held on Feb. 21 in New Zealand’s second largest city of Christchurch to mark the 8th anniversary of a
devastating quake that claimed 185 lives spanning more than 20 nationalities, including 23 Chinese students. A 6.3-magnitude quake struck the city on Feb. 22, 2011, with a depth of only 4 km. Then-Prime Minister John Key described the disaster as “New Zealand’s darkest day.” (Xinhua/Guo Lei)

Although we won’t see on site until next year, the team reinstating one of New Zealand’s most significant heritage buildings and one of our city’s most iconic buildings – Christchurch Cathedral – is busy with critical planning behind the scenes before physical work begins.
“People might be wondering why we haven’t started physical work. This is a complex and unique project and we’ve got to get the planning right,” says ChristChurch Cathedral Re-instatement Project Director Keith Paterson.
Reinstating means a combination of repairing, restoring, reconstructing and strengthening.

“The Cathedral will look very similar, retaining many heritage features. Importantly, the re-instated Cathedral will be safer, with base isolation to help protect against future earth-quakes.”

“Right now we’re working out how to efficiently stabilise and strengthen the building. At the same time, we’re defining the enhancements required to ensure the Cathedral is bet-ter equipped than ever for future worship and civic events, while respecting its heritage. Internally it will be more functional, more flexible, and more comfortable, with modern heating, sound and visual systems. All of those elements need careful planning,” Mr Pater-son says. The first step is stabilising the damaged building so it can be worked on. “We’ll be setting up the site early next year ready for stabilisation, which will take 12 to 18 months. Techniques might include supporting the external walls, propping the internal walls, and installing supporting frameworks for columns and arches. After that the main Cathedral structure will be strengthened, reinstated and reconfigured internally.

This means people won’t see much action on the Cathedral site this year, apart from maintenance ctivities and some investigations. “In the meantime, we’ve symbolically brought back the sound of Cathedral bells, which we’ll be ‘ringing’ every Friday lunchtime using loud-speakers. This is a reminder that this iconic heritage building will once again be full of people, prayer, music, song, and the sound of bells,” Mr Paterson says. Did you know? The clapper is the hammer that strikes the inside of the bell creating the ring.

WHY DESPAIR IS BEATING HOPE