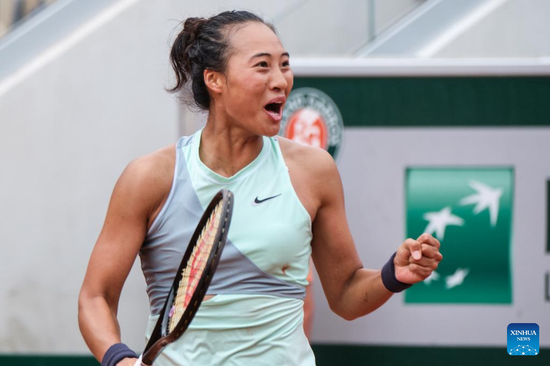 Zheng Qinwen celebrates victory after the women’s singles second round match between Zheng Qinwen of China and Simona Halep of Romania at the French Open tennis tournament at Roland Garros in Paris, France, on May 26, 2022. (Xinhua/Meng Dingbo)

Chinese teenager Zheng Qinwen earned the biggest victory of her career at the French Open on Thursday, rallying to beat two-time Grand Slam winner Simona Halep 2-6, 6-2, 6-1 to reach the third round of the clay major.

“I believe that there is always a chance to beat any opponent, it doesn’t matter who is in front of me, that she has much more experience than me, and she is a very good player,” said Zheng, “That was an important experience for me, to stand in a big stadium and beat a great player.”

19-year-old Zheng fired 27 winners at the Simonne-Mathieu court, one of the three central courts at Roland Garros, to secure her first win over a top-20 player.

It was the pair’s second head-to-head meeting, after the Romanian took victory in the first in a pre-Australian Open event in Melbourne in January.

Barcelona-based Zheng went into the match slowly in the first set, while her experienced opponent broke her first service to establish an early lead. 2018 French Open champion Halep then broke again in the seventh game before taking the first set 6-2 in just 35 minutes.

But Zheng improved her serve and forehand in the second, while Halep suddenly lost control of the contest and seemed to face some physical problem.

The 19th seed admitted after the match that she had suffered a panic attack after the first set which make it difficult for her to cope with Zheng’s big serve and powerful forehand.

“It was just a panic attack. I didn’t know how to handle it, because I don’t have it often,” said Halep.

Zheng grabbed the chance to storm to a 6-2 win in the second and completed the victory with an overwhelming 6-1 in the deciding set.

Next for Zheng is local favorite Alize Cornet, who knocked out another former French Open champion Jelena Ostapenko later on Thursday to progress.

Top seed Iga Swiatek extended her unstoppable form to rack up her 30th straight victory with a comfortable 6-0, 6-2 win over Alison Riske of America.

“I think it’s like a constant presence that I have since I started playing on the WTA, for sure, winning all these matches gave me a lot of confidence but I also knew that it could really press me down if I don’t adjust to it well,” said the 2020 French Open winner, who joined third seed Paula Badosa and seventh-seeded Aryna Sabalenka to remain the only three top 10 women’s seeds to survive the opening two rounds.

Eighth-seeded Karolina Pliskova and Danielle Collins, the ninth seed, were added to the list of victims on Thursday.

Pliskova was ousted by French world No. 227 Leolia Jeanjean, while Collins fell to American compatriot Shelby Rogers 6-4, 6-3. Jeanjean is the lowest-ranked woman to beat a top 10 player at Roland Garros in 34 years.

“He drove me crazy,” said Tsitsipas, “It was really frustrating because he got behind every ball.”

On Tuesday, the Greek star had to come from two sets down to defeat Lorenzo Musetti of Italy in the first round. Tsitsipas will face Sweden’s Mikael Ymer for a place in the last 16.

Time for Australia to reset relationship with China

After outcry, primary school textbooks to be changed