Policeman mutilated in rioters’ acid attack resolves to get back to frontline, protect HK

– The acid attack caused multiple injuries to his right arm and back, diagnosed by the doctor as the most severe degree of chemical burns.

– “Pain, itching, bleeding, scabbing, and bleeding and pain again. This is my daily routine.”

HONG KONG, May 3 (Xinhua) — Seven months on, the pain from the acid burns was still unforgettable and deeply traumatic for Hong Kong policeman Tiger (not his real name).

“My skin turned brown right in front of my eyes and instantly started blistering, with blood oozing from the open wound,” the police officer told Xinhua when recalling the moment he was assaulted by rioters last year.

Tiger was injured on Oct. 1, China’s National Day, when Hong Kong was gripped by heinous violent incidents. One of the shocking scenes of violence happened near the Tuen Mun Town Hall, where he, along with scores of other police officers, was on duty.

About 700 black-clad rioters who had amassed outside the town hall since that morning attempted to cut the rope tied to a flagpole and desecrate the national flag.

The police nearby moved to stop the illegal acts but were quickly surrounded by the mobs who rained down a torrent of acid bombs, stones and umbrellas on them. “We were ferociously attacked by them, who repeatedly threw acid on us and even forcibly dragged away suspects we had arrested,” Tiger said.

As the chaos ensued, Tiger was hit in the nose by a hammer and then suddenly felt an indescribable pain in the right arm, which he found out later was hit by an acid bomb.

His colleagues rushed him to an ambulance. As the roads nearby were blocked by the rioters, it took about half an hour for the ambulance to reach the hospital nearby.

In the back of the ambulance, Tiger endured what he described in no uncertain terms as “the most painful 30 minutes in his life.” “All I could do was to kick the door to try to distract myself (from the pain) until my body was out of strength,” Tiger said. 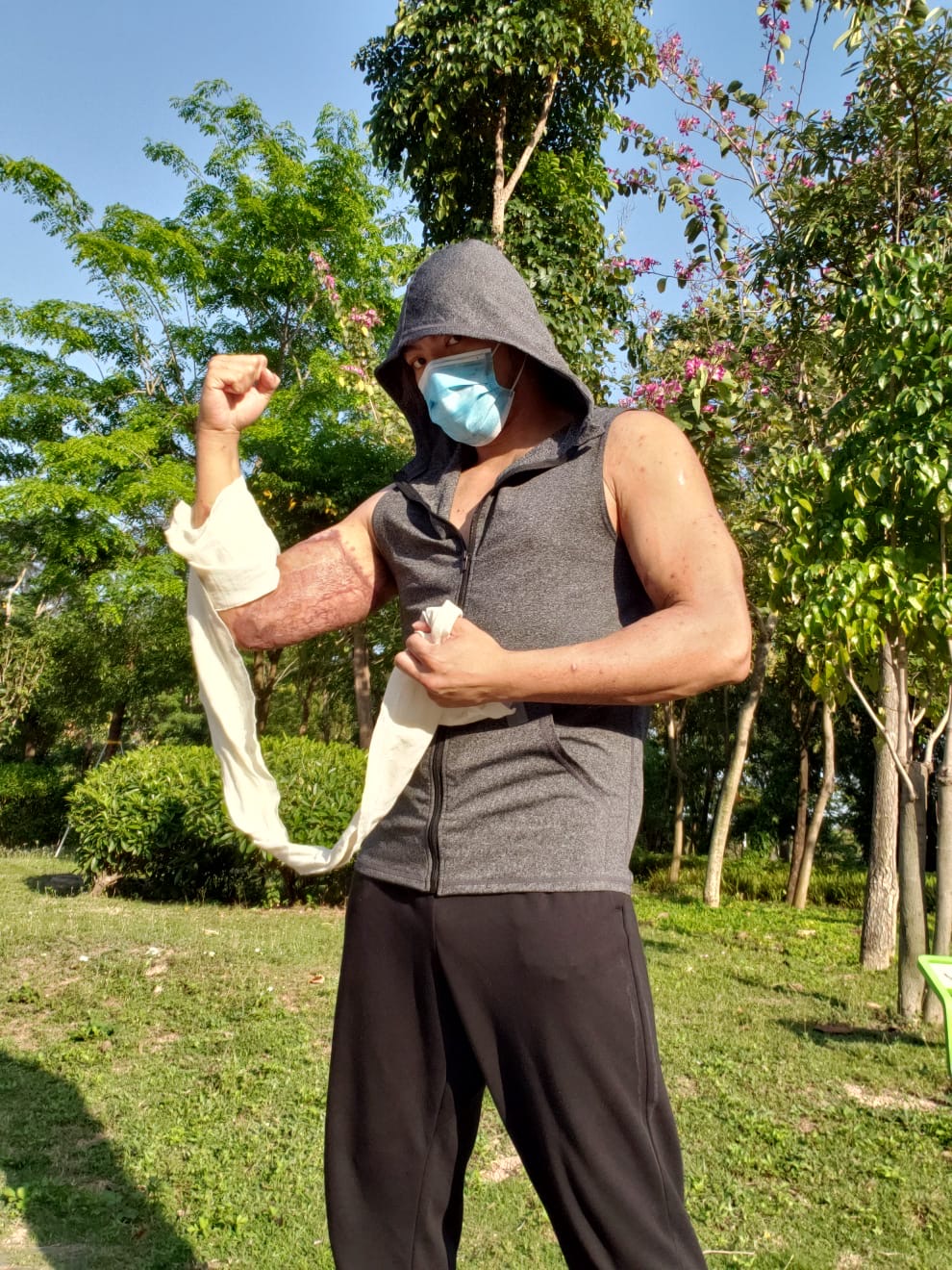 Tiger undergoes rehabilitation at a hospital on April 29, 2020. (Xinhua)

The acid attack caused multiple injuries to his right arm and back, diagnosed by the doctor as the most severe degree of chemical burns possible.

Tiger has undergone three operations, in which the damaged muscular tissues and nerves were removed, an artificial skin was used temporarily, and his own skin from the inner thigh was finally transplanted to the wound. During this procedure, about 300 nails, each 0.5 cm long, were once hammered in his body to fix the artificial skin.

“Pain, itching, bleeding, scabbing, and bleeding and pain again. This is my daily routine,” Tiger said in his social media post, with photos showing a huge patch of raw, reddish-brown tissue on his forearm.

“Even nowadays, I find myself waking up at night screaming in agony,” he said.

Tiger is one of hundreds of Hong Kong police officers injured by various weapons, from petrol bombs to iron bars, used by radicals during months of violent protests and riots last year.

In one such case, a policeman, walking among a team of officers on a footbridge, was slashed in the neck by a rioter hiding in among the crowd in October. In another, an arrow shot by a rioter pierced the left leg of an officer responsible for media liaison near the Hong Kong Polytechnic University in November.

According to the figures released by the Hong Kong police, more than 500 policemen have been injured in related law enforcement actions since June last year, while the private information of over 3,100 police officers and their families has been maliciously leaked online. 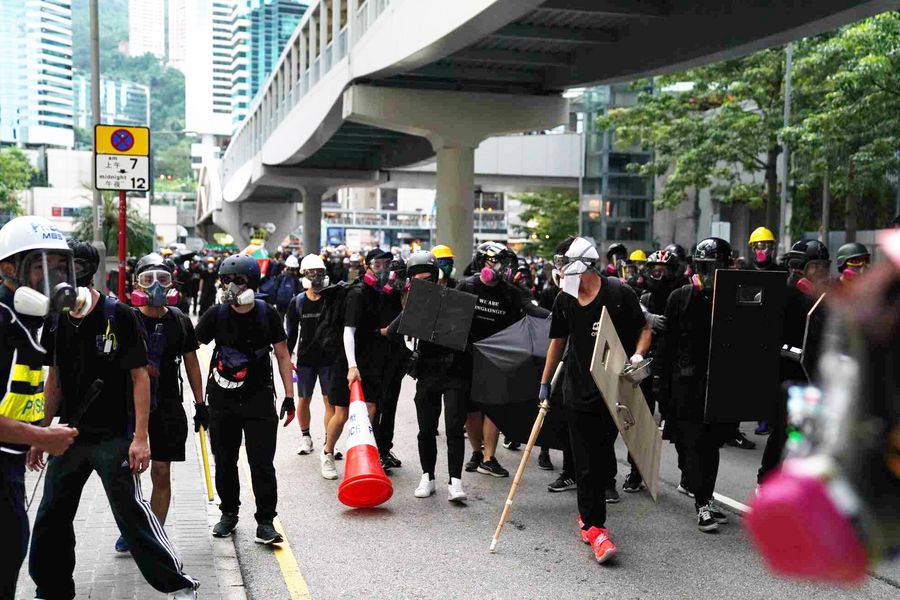 Since he was injured, many people have visited him, sent greeting cards and cheered him on social media. Tiger, a tough man, who did not shed a single tear during the whole ordeal, said in a choked voice that he would like to thank all those people for their care and support.

“I was deeply moved by such a strong showing of support and empathy, and my desire to rejoin my teammates and resume my duties has become stronger than ever,” Tiger, still in hospital with a thick bandage around his arm, said.

A black belt in karate, Tiger said he had always exercised restraint on duty and strictly adhered to the code of conduct of the police.

“I have never used my martial art skills during operations but only those I have been trained to prevent illegal acts and protect Hong Kong residents,” he said. “I am a police officer and carry out my duties.”

Although social unrest has subsided in Hong Kong since the COVID-19 outbreak in January, the shadow of violence has lingered. Illegal gatherings have started to emerge in recent days, bringing back bitter memories of last year.

Hong Kong police seized a homemade bomb and some poisonous and flammable chemicals at a wasted school in Kowloon Bay on Saturday, the 11th time for the police to find explosives in Hong Kong since the social unrest last year. Last month a homemade bomb was even mailed to the office of Hong Kong’s top police officer. 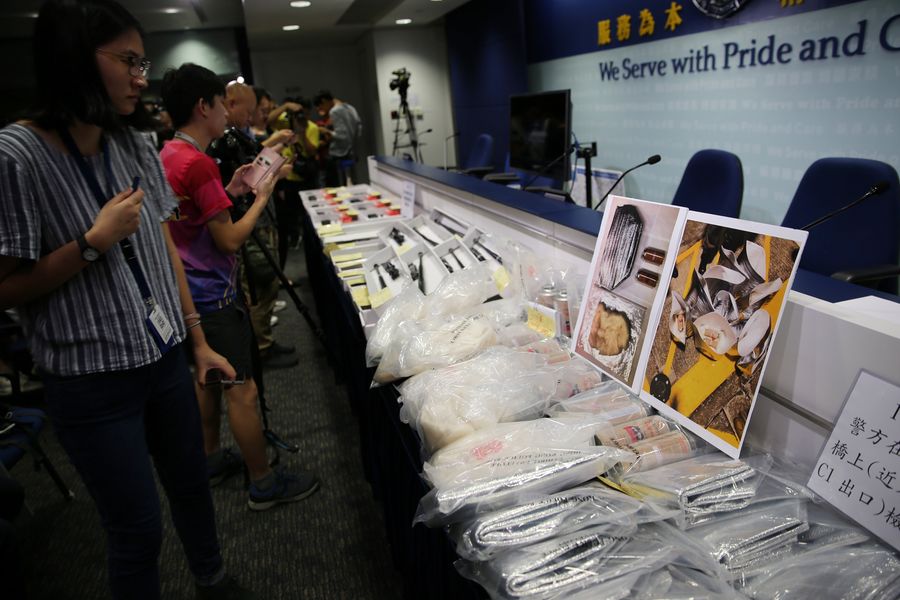 Despite the looming danger on the frontline, Tiger said what had happened to him made him stronger and fortified his resolve to uphold justice through his duties and protect the lives of innocent people in Hong Kong.

“As long as Hong Kong residents are well protected and peace can be guaranteed, my injuries are truly worthwhile,” Tiger said.