Cellist Yo-Yo Ma: Connection with Christchurch through “The Bach Project”

Cellist Yo-Yo Ma: Connection with Christchurch through “The Bach Project”

In my last article (Issue #46) I asked if readers felt any connection with cellist Yo-Yo Ma, before his début performance in New Zealand – perhaps through music, or his generation, or performing in Christchurch Town Hall, or promoting our humanity through culture.  Yes, Ma made emotional connections with us in Christchurch, through “The Bach Project.”

When Ma stepped onto the concert stage, the audience – many were his generation or older – erupted into applause.  Our welcome to him was tangible, emotional, and clearly, he felt it, too.  There was something about his bearing, his kindness and courtesy towards us, that connected us – almost 2,500 people in the audience from all over New Zealand – with him, and with each other.

The Chinese say that “The eyes are the windows to the soul” and Yo-Yo Ma often made eye contact and smiled – while playing his cello, unaccompanied and from memory – with various members of the audience, including children sitting at the Maestro’s feet – what a life-lesson for them.  I couldn’t help wondering if they were the international musicians of the future. 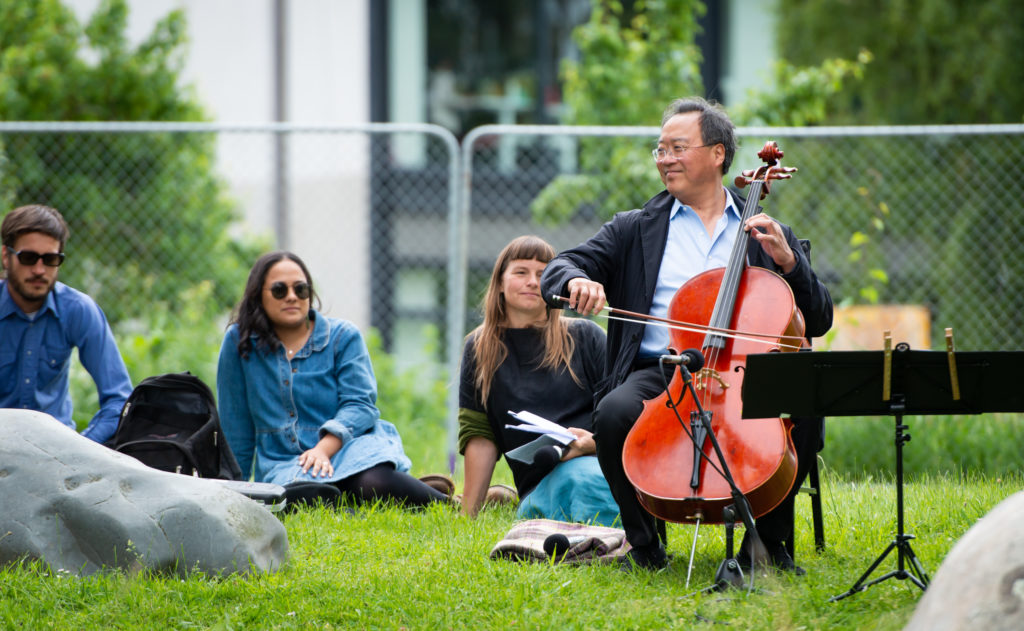 Of the 36 iconic venues chosen world-wide during 2018-2019, our Town Hall was Ma’s second-to-last stop.  The honour was ours, the privilege, he said, was his. After speaking in Te Reo Māori, Ma added in English, “I can’t tell you what a privilege it is to perform for you tonight with the beautiful hall you have rebuilt.”  He dedicated Suite III in C Major to those who had contributed to its restoration.

“The Bach Project” not only provides access for people to J.S. Bach’s 300-year-old music – Six Suites for Unaccompanied Cello BVW 1007-1012 – Ma has found they produce “…a very powerful effect that’s encoded in the music … [which] seems to illicit, or give to the listener, some kind of response that is helpful going through tough times….”

Introducing Suite V in C Minor, Yo-Yo Ma shared that it sustains him in times of crisis and trauma, and then dedicated it to those who had experienced loss, of any degree – loss is loss – including loss of a favourite teddy bear, loss of life, loss of health, or loss of dignity.  Then, at its completion, he sat motionless, hands frozen in the air, where they had finished playing.  The audience sat silent and spell-bound – now my secret tears came – as he sat there, symbolically holding our pain with such a deep level of reverence, respect, understanding, and compassion – born, I suspect, of his own suffering.

I felt so connected, so human – more than I have felt for some time.  I was amazed at the depth of connection: with Bach, with Yo-Yo Ma – whom I have never met – and with those seated around us. Speaking to people afterwards, one lady commented that she felt that “the notes were magic, as if they had magic in them” and she, too, had felt like crying.  Other attendees – with no musical training or appreciation for Bach’s type of music – were totally captivated, and drawn in to Ma’s magnificent musical world.  Human connection!

On a whim and unaware which movement was being played at that time, I checked my pulse – 64 beats per minute – perfect Baroque timing, creating a very healthy state in my heart and mind.  I have read about that, and played the CDs during my graduate studies.  Now I have experienced it live – in the Christchurch Town Hall.  (And I’m listening to Ma’s incredible, third recording of the suites, at this moment, while I write this article.)

Then, of the entire cello encore repertoire Yo-Yo Ma could have chosen from, he shared the final spotlight with his new-found friend, local musician Marlon Williams.  When Williams, at times, sang vocalization rather than words, Ma’s cello sounded like a second voice, in tight, perfect harmony.  As one, we leapt to our feet, connected in an emotional standing ovation. 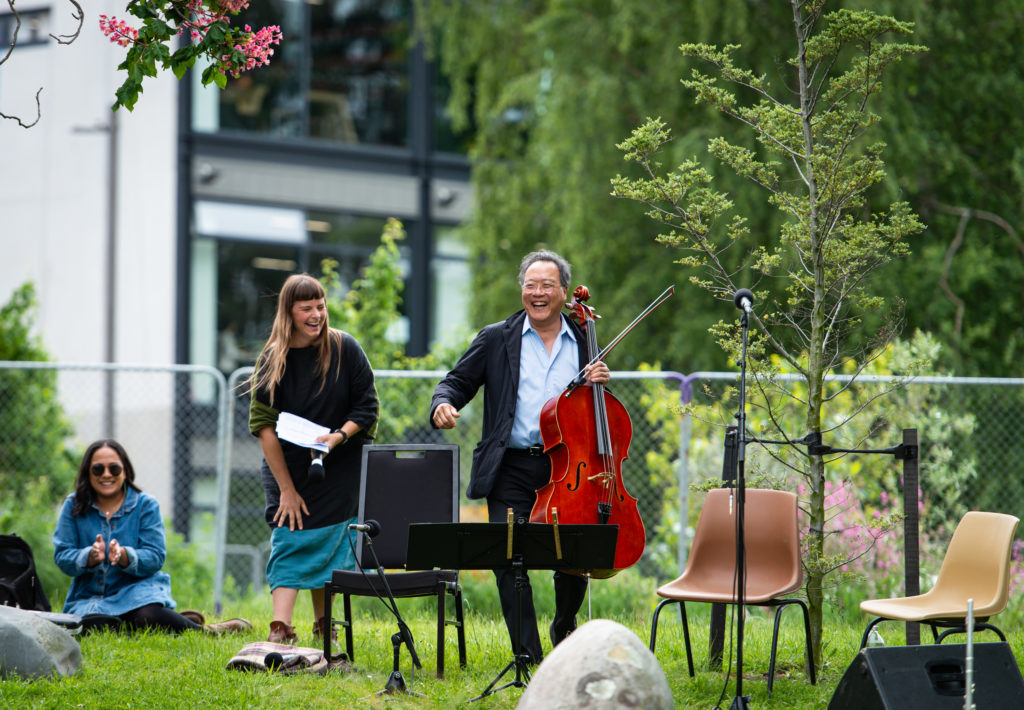 Connection with Cultures through this Day-of-Action-Man Hero

Songs for the Water – Waitata ki te wai – lunchtime concert “The Press” newspaper headline called a “Treat at the riverside” saw hundreds of people present on the banks of the Avon, to listen to Yo-Yo Ma perform solo, and with local Kiwi Artists.   “The Bach Project” Day of Action in Christchurch, was held the day after the concert, as Ma has done around in 36 locations, around the world.

Included were weavers, speakers of oral tradition, musicians including Marlon Williams again, and Phil Dadson who performed with stones to make them sing and somehow sound like drops of water.   Other instrumentalists used modern or traditional instruments, and singers performed for us, including the final shared song, “Te Wai Tuku Kiri.” This Day of Action focused on our connection to, and need of, water for life, and our ancient history, our present, and our need to protect our future.  Ma mentioned important rivers in his own life – from his father’s hometown, China, to Paris – Ma’s birthplace, and near his home in Cambridge, MA.

As a very human and humanitarian hero, Yo-Yo Ma believes “…that culture – the way we express ourselves and understand each other – is an essential part of building a strong society.”  He hopes that “together we can use Bach’s music to start a bigger conversation about the culture of us.” 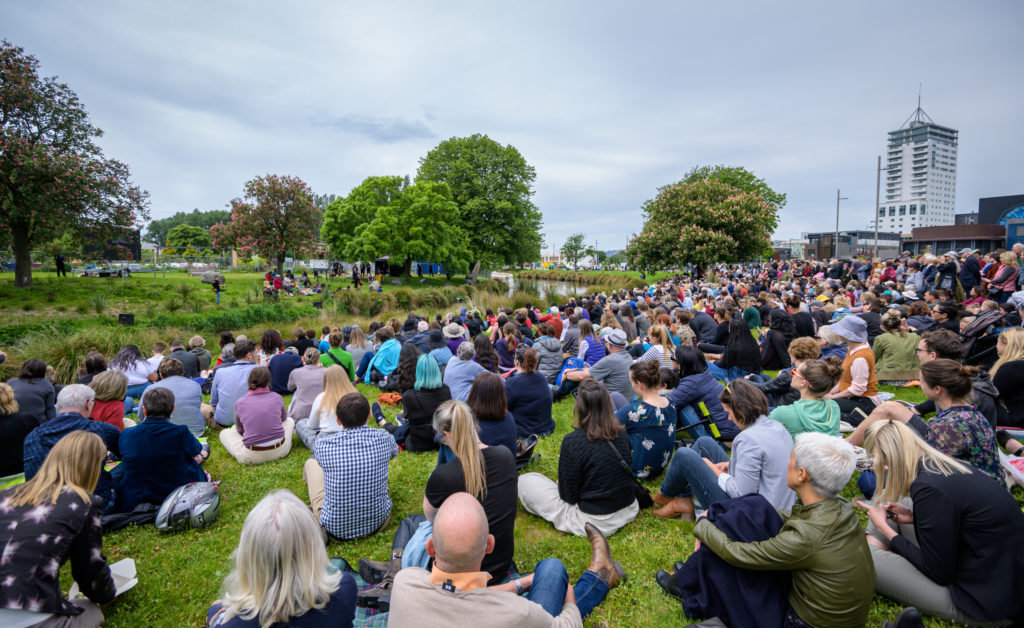 Through “The Bach Project” Yo-Yo Ma connected with people in Christchurch – deeply, sincerely, compassionately.  He promoted communal conversation through “his enduring belief in culture’s power to generate trust and understanding … to foster connections that stimulate the imagination and reinforce our humanity.”

His concert was a night that will be remembered, and treasured, by generations, and for decades to come – a legend created in our presence.  The conversation started on the banks of the Avon River will continue to build connections in our community, as we strive to rebuild our city, each other, and ourselves.

“WE NEED TO LEARN TO EMBRACE”-- Interview with Shane Whitfield, Regional Manager Southern at Office of Ethnic Communities