People from both New Zealand and China still very often talk about Rewi Alley, a New Zealand-born writer, social reformer and educator, even 32 years after his death in Beijing.

An old friend of the Chinese people, Alley spent 60 years living and working in China. He made important contributions to the Chinese people’s fight against the fascist invasion, the economic development of the new China, and the friendship between China and New Zealand.

Earlier in September, a delegation led by Lin Duo, secretary of the Communist Party of China (CPC) Gansu Provincial Committee, visited New Zealand to mark the 35th anniversary of the sister city ties between Gansu Province and Christchurch, the largest city in New Zealand’s South Island.

The Christchurch-Gansu link, which was established in 1984, was initiated by Alley, who spent 10 years in Gansu’s Shandan County. Alley said the landscape there resembled his hometown, the small town of Springfield in Canterbury, New Zealand.

Earlier in September, a delegation led by Lin Duo, Party chief of northwest China’s Gansu Province, visited New Zealand to mark the 35th anniversary of the sister city ties between Gansu Province and Christchurch, the South Island’s largest city. The Christchurch-Gansu link, which was established in 1984, was instigated by Alley, who spent ten years in Gansu’s Shandan County. The delegation took this picture at the Rewi Alley Memorial Park in Alley’s hometown on Sept. 8. (Photo by Zhu Qiping)

Lin said his delegation was warmly welcomed by people in Alley’s hometown, which made them feel at home.

During their trip, the Gansu officials visited farms, water management projects, sister schools and the Rewi Alley Memorial Park in Alley’s hometown, while discussing further cooperation in agriculture and other fields.

VISIT IN MEMORY OF ALLEY

Between 1942 and 1951, Alley, a great internationalist fighter and a famous socialist, spent about 10 years in Shandan, which was “the happiest and most memorable decade in Alley’s life,” according to Lu Sidong, head of Shandan County of Zhangye, Gansu Province.

Even after Alley moved to Beijing in his later years, he still returned to Shandan six times and donated to the county the cultural relics he kept for many years.

Lu was part of the delegation visiting New Zealand this month. He signed a memorandum of cooperation with Selwyn District, 37km southwest of Christchurch, where Alley was born in 1897.

“This is an upgrade of a cooperation agreement launched 10 years ago,” Lu said. “We upgrade our cooperation in his memory, in the hope the friendship between the two peoples is everlasting.”

Liu Xiaolin, vice president of Gansu Provincial People’s Association for Friendship with Foreign Countries, said Shandan, a mountainous Chinese county, made Alley more homesick as he found geographic similarity between the two places, which ultimately caused him to settle there for 10 years.

“Alley lived there as a peasant and talked to Shandan folks in a local dialect. He bought sewing machines and equipment for villagers and taught them to make clothes and shoes and other practical life skills, which were the beginnings of a vocational school he set up at the same time,” said Liu, a scholar who studied Alley’s life.

Alley set up the Bailie School named after American missionary Joseph Bailie in Shuangshipu in Gansu’s neighboring Shaanxi Province in 1942. The school, which was moved to Shandan in 1944, had trained a lot of talented engineers who played roles in the reconstruction of post-war China, according to Zhang Youwu, party secretary of Shandan Bailie School.

After the founding of the People’s Republic of China in 1949, the school was moved to Lanzhou, capital city of Gansu Province, where it became part of the Bailie Oil School, which was associated with the new oil refinery there, Zhang said.

Through Alley’s help, local farmers learned industrial skills such as driving and maintaining trucks in the 1940s, a critical time for the liberation of China, Zhang added. Alley also trained early oil workers for Gansu’s Yumen Oilfield, the earliest oilfield exploited in China.

Alley’s help to pioneer China’s Gung Ho movement of small mobile cooperative factories during the war against the Japanese played a role in the westward front of the People’s Liberation Army and the liberation of northwestern China, bringing new technologies to China’s landlocked areas, Zhang remarked.

His ashes were scattered over the Shandan countryside, in accordance with the instructions in his will.

Wu Xi, Chinese ambassador to New Zealand, told the crowd at the opening ceremony of a photo exhibition marking the 70th anniversary of the founding of the People’s Republic of China that Alley’s educational philosophy was enormously influential on the modernization of China.

“The Kiwi way of thinking he taught us was to use the hands and the brain in combination to create and analyze. It is still just as relevant today as it was in the 1950s,” Wu said on Sept. 16 in Wellington.

“Rewi Alley was one of the few Western people who not only witnessed but contributed to the transformation of China from a war-torn country in turmoil, into the unified country we see today that has raised the living standards of many millions of people,” she said. 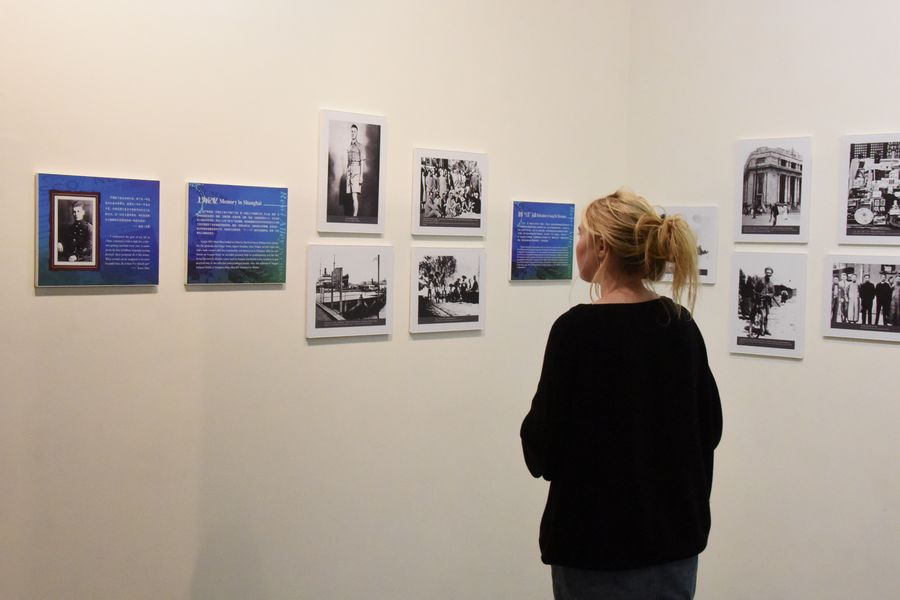 A visitor views photos of Rewi Alley in a photo exhibition marking the 70th anniversary of the founding of the People’s Republic of China launched at the Academy Gallery in Wellington. (Xinhua/Lu Huaiqian) 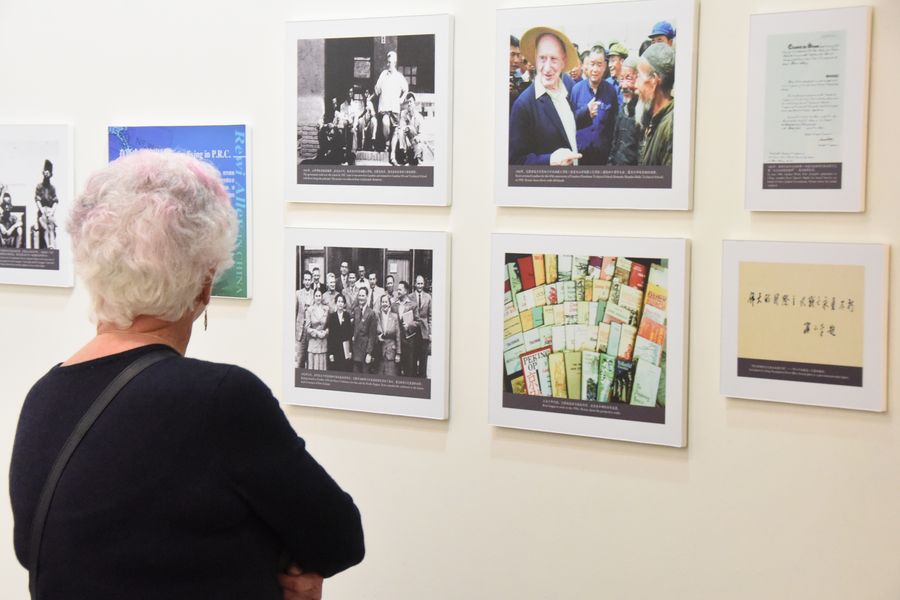 A visitor views photos of Rewi Alley in a photo exhibition marking the 70th anniversary of the founding of the People’s Republic of China launched at the Academy Gallery in Wellington. (Xinhua/Lu Huaiqian)

Alley later moved to Beijing and devoted the next 30 years of his life to safeguarding world peace and international friendship.

Alley died in Beijing on Dec. 27, 1987. The late Chinese leader Deng Xiaoping wrote an inscription in memory of him: “Eternal Glory to the Great Internationalist Fighter.”

In 2009, Alley won a posthumous award as one of “China’s Top Ten International Friends.” His love for China has become a bridge of friendship between New Zealand and China.

Although Alley did not have children of his own, younger generations of his extended family, as well as children adopted by him in China, all commemorated him and promoted his spirit in both countries.

The commemoration of Alley has become a key event between New Zealand and China.

“My grandfather was very supportive of his work there, so we were aware of it. When I traveled to China in 2017, I saw the scope of what he had done. I really appreciated his work a lot,” said Stuart who currently works for the Christchurch City Council.

“I think he had forged a relationship very early on. It has established the beginning of a very sound relationship,” she said, adding Rewi Alley believed people should have a fair life, and could reach their potential through education.

He really cared about people and humanitarian causes, Stuart said. 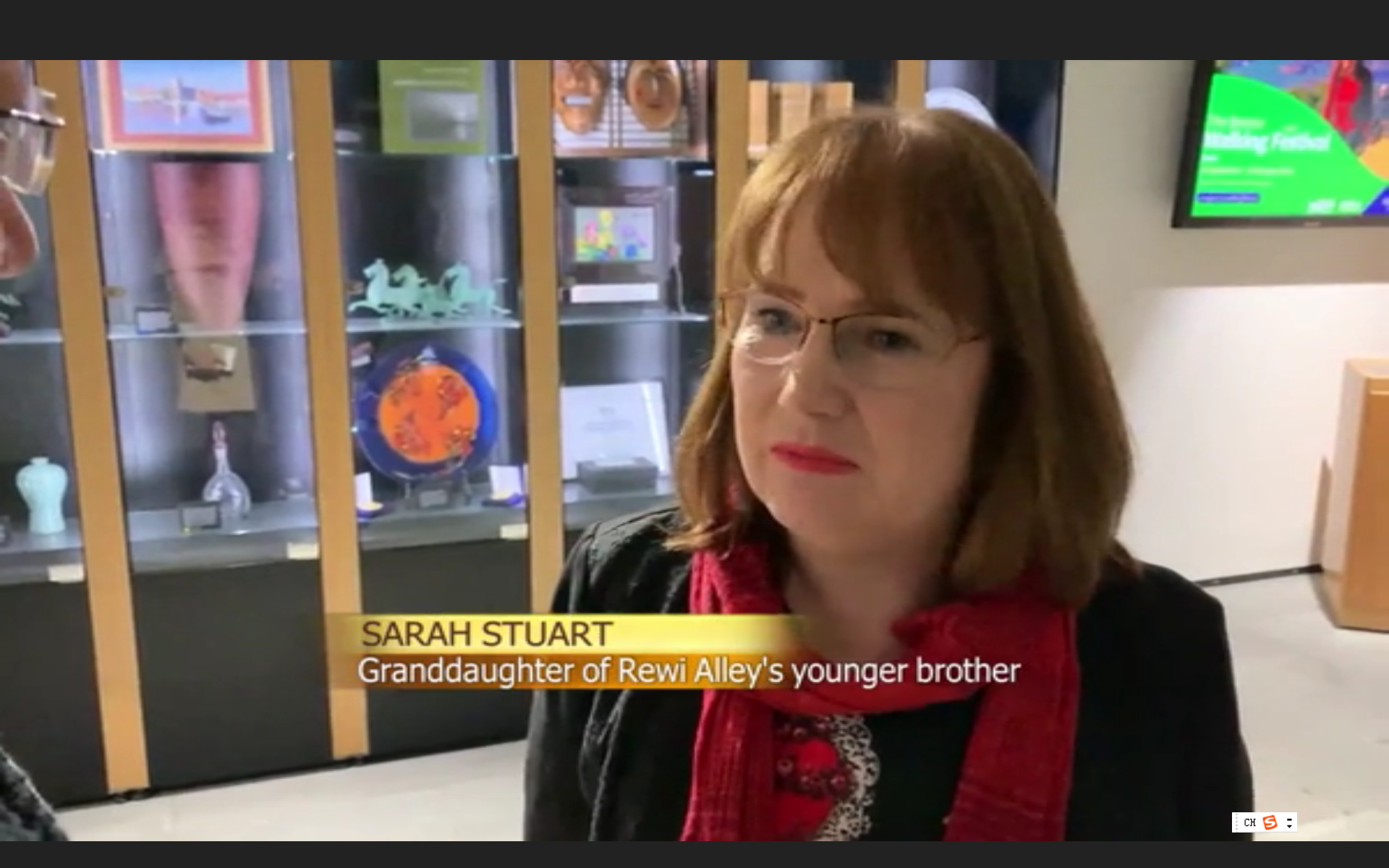 Deng Bangzhen, one of Alley’s adopted sons, recalled Alley’s setting up of industrial cooperatives in China.

“At first, he was chief factory inspector in the concession (of Shanghai)… When Japanese troops invaded Shanghai, his home was also bombed. At that time, many people who had fled their homes rushed to Shanghai. There were lots of them. Rewi saw them, and he saw what kind of life they were living. It was miserable. Besides, he thought that if China’s economy collapsed, it would have been a disaster for China’s resistance against Japanese aggression. So he and Edgar Snow came up with an idea, that is, to organize displaced people and set up industrial cooperatives.”

“Besides several adopted sons, he helped many Chinese children. In addition, he really loved China. When he was old, we often talked. I felt he had often forgotten that he was a New Zealander, as if he were Chinese,” Deng said in an interview with Xinhua at his residence in Auckland. 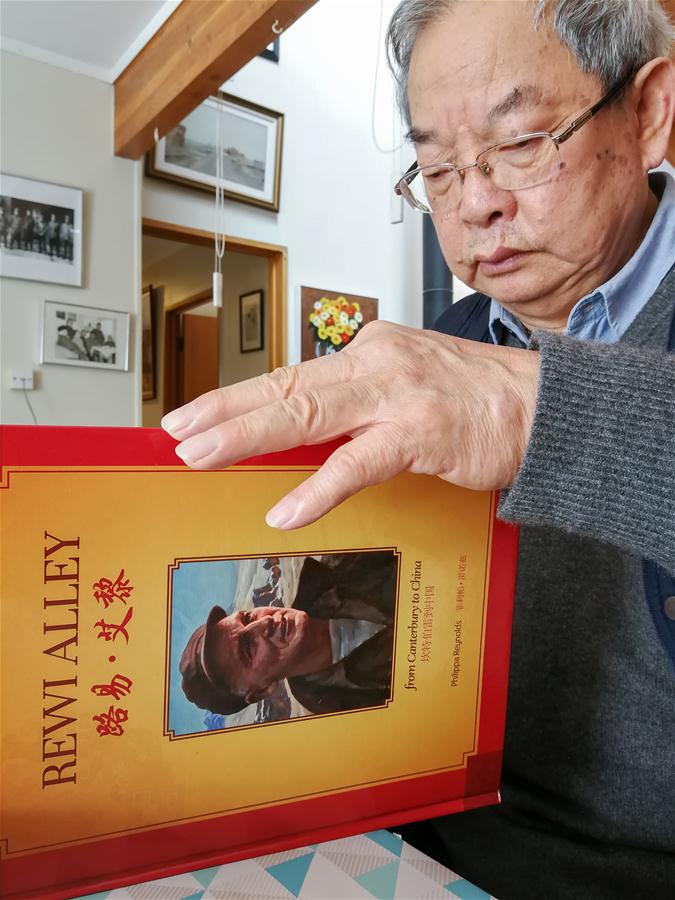 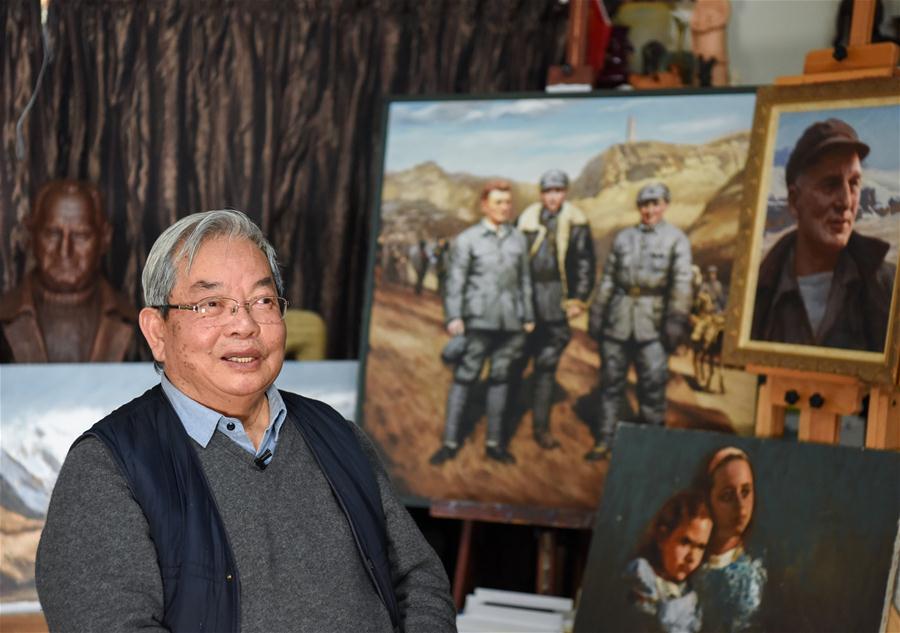 Deng Bangzhen, a painter and one of Rewi Alley’s adopted sons, receives an interview with Xinhua in Auckland, New Zealand, Aug. 30, 2019. (Xinhua/Guo Lei) 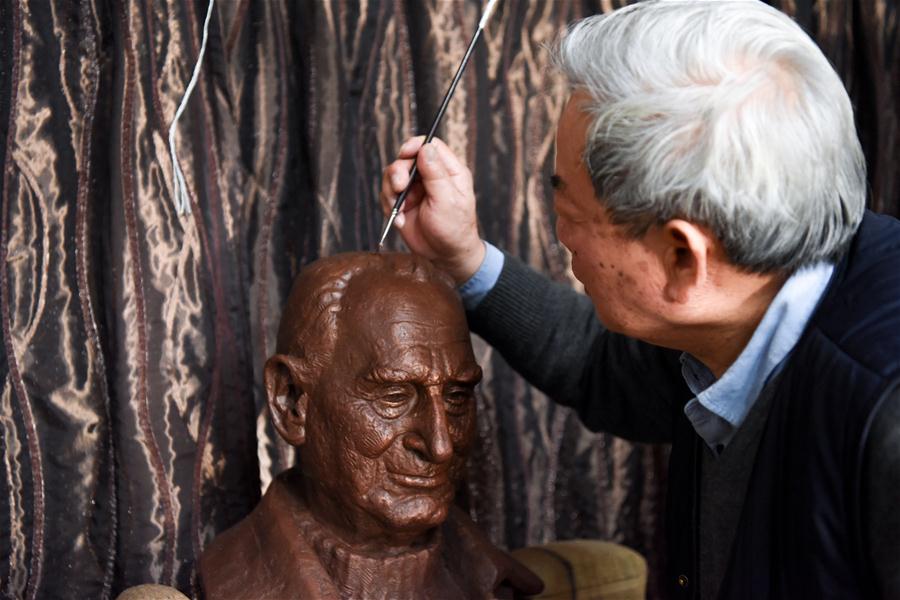 Alley also wrote and translated many works on China, including some Tang Dynasty poetry. According to Deng, Alley liked poet Du Fu the most because Du’s writings concerned people.

On Dec. 1, 2017 when China and New Zealand marked Rewi Alley’s 120th anniversary, the University of Canterbury’s Confucius Institute held a semiar on Rewi Alley’s educational philosophy, as well as his contribution to the Chinese poetry translation.

Alley’s legacy also includes a Christchurch-based Chinese school named after him, established in 1998 to teach Chinese language and culture, the largest of its kind in the South Island.

Rewi Alley Chinese School is located on the campus of Wharenui School, where he had studied when his father was the school’s first principal. (Xinhua reporters Guo Lei and Lu Huaiqian contributed to the story)

Black terror: The real threat to freedom in Hong Kong